Yeah, I know that the astronomical autumnal equinox happened the week before last, but from a “boots on the ground” standpoint, we’ve been just a bit behind the curve here. (As is often the case in Iowa. Zing!) But that’s changing now, and quickly. Our daily walks over the past few days have involved more clothing layers than usual, and occasional hats, and tonight we’ve got our first frost warning posted. I’m planning to do a long bike ride tomorrow (for this), and it looks like the temperature will be ~36º F when I get rolling. More layers!

But that should be a short-term situation, as  today marks the three-week point before we load up the jalopy and move to Sedona, Arizona. Which means that unless global weirding queues up some particularly extreme and abnormal scenarios over the years ahead, 2020 should the last year that I spend dreading cold season, while trying to enjoy the pleasant elements of autumn. Not complaining. After 35+ years living in the frozen, damp, windy climes of Iowa, Chicago, Upstate New York and Idaho, I’m more than ready for a bit of year-round dry heat.

That said, I do note that I have raw, primal reactions to two common stimuli experienced in Northern autumns: hearing the sound of geese migrating southward and seeing Orion hunting in the Zodiacal plane on crisp, clear nights. I think these sights and sounds must resonate in our collective unconscious from centuries when shorter days and falling temperatures didn’t just mean higher fuel oil bills or extra lap blankets, but instead meant that the most perilous time of the year was nigh, and many of a community’s weaker members wouldn’t live to see the return of sunlight and warmth. Any time I hear the geese fly over, I involuntarily stop in my tracks and look up. Any time my eyes are drawn to the night sky and light upon Orion’s belt, they stay there, taking an active effort of will to look away. Those sounds and sights evoke awe, which I think of as wonder leavened with fear.

Autumn is a bittersweet season, at bottom line. I love the color, I love the weather . . . but winter is coming soon. For inside workers, it doesn’t really change the day to day pattern of our lives. But for those who spend warm months on the land, I imagine winter is a much different experience. I wrote a poem about these sorts of feelings back in the early 2000s called “Harvest.” It doesn’t explicitly mention geese or Orion, but it does try to evoke the sense of awe the season inspires in me. When I wrote it, I kept feeling like I should end it, then kept tacking on extra triplets (it has an odd structure), much in the way that we cling to the last leaves on the trees, the last warm days, the last pleasant evenings, lingering before the darkness falls and the snow is upon us.

While I was looking for that poem today in my old writing files, I stumbled over a few other pieces that also seem to evoke that autumnal spirit for me, some directly, some obliquely. They’re all posted below, for your consideration. Perhaps they’ll read well with a blanket and a cup of hot chocolate?

Let’s take a long deep breath
and ponder the pasture
and our place in it:
we’ve got the harvest in,
the orchards are pruned and
all our wood’s been split;
the leaves have long since gone,
the frost’s on the pumpkins
and it’s cold at night.
In less than four short weeks
we’ll stand here again and
see a sea of white.
We’ve stored the grain inside,
stacked hay in the stalls and
put our tools away.
The growing season’s done,
the colors have faded
into brown and grey.
It doesn’t seem that long
since last we all stood here
at this time of year.
We’ll hunker down inside
for five months or so and
try to fight the fear
that winter brings to us:
the cold and the darkness
and the sickness too.
We’ll count the days for months
and pray for the spring, that’s
all that we can do.
These bittersweet fall months
are fraught with emotion
in these farming fields:
we’re glad the harvest’s done,
we’re proud of our work and
happy with our yields,
but now we hibernate
like beasts in the forest
(less the gift of sleep).
We take one last long look
and walk from the fields, and
many of us weep.

Outside, we can tell the air itself is thickening,
while we ponder cold weather wear we’re ordering
from fall catalogs, the rate of cooling quickening
with the first frost freezing hard the backyard bordering,
the once green growth succumbing to nature’s savaging,
organic ice orchards wilting first then splintering.
By night, we hear the winds all whistling and ravaging,
and know that before we’re ready, we’ll all be wintering.

Gotta go the long way, fly along the highway,
high above the flyways, flat upon our backs.
Order over-rated, over-saturated,
rate the ones we hated, stop them in their tracks.

Wing as sharp as knife edge cuts into the first hedge,
watching from the high ledge, just above the stacks.
Flightless in the liner, lines from here to China,
over Asia Minor, chin up, Uncle Max.

Gotta go the long way, drive below the flyway,
park it in the driveway, fill and seal the cracks.
Watching the migration on a TV station,
where’s the destination? I’m so bad with facts.

Gemini Snake coming out of the forest,
as the leaves fall, he rolls on, he rolls on,
I had a dream he was headed this way, and
I’m thinkin’ he’ll get here tomorrow, ’round dawn.

Gemini Snake at the edge of the farmlands,
he never stops, he rolls on, he rolls on,
went to the church to tell Preacher he’s coming,
and bone up a bit on those visions of John’s.

Gemini Snake in the next village over,
spinning off sparks, he rolls on, he rolls on,
on the horizon, we see smoke arising,
and harvest our crops, and chew bitter pecans.

Gemini Snake coming faster and faster,
right into town, he rolls on, he rolls on,
passes the town square and court house on Main Street,
damned if he doesn’t roll right to my lawn.

Gemini Snake passes straight through my property,
he doesn’t stop, he rolls on, he rolls on,
where he is headed now, I can’t imagine,
but I’m quite relieved by the fact that he’s gone.

There’s a lantern in the window
and a wild boar in the wood
as I’m standin’ in the plantin’ field
and feelin’ pretty good
’bout my farmin’ situation
an’ my plans for wintertime,
’bout that woman from Winooski,
‘an how glad I am she’s mine.
Got a bottle in the bureau,
and a smokin’ ham out back,
as I look about my holdin’s,
there ain’t nothin’ that I lack,
‘cept that boar . . . he keeps escapin’
every time we hunt him down:
like a ghost he disappears and leaves
us shootin’ at the ground.
I got ‘coons and I got turkey,
I got squirrels and I got deer,
shoot ’em, skin ’em, cook ’em, eat ’em,
that’s the way we do it here.
But that boar, he keeps eludin’ us,
he’s smart as twenty men.
I b’lieve I’ll know true happiness
when I make a ham of him. 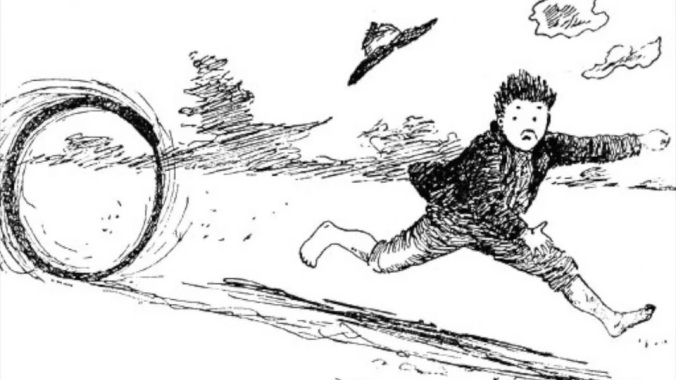 Gemini Snake is a particular loathsome specimen of the hoopsnake genera, clearly.