My most recent trip was to Washington, DC, and Marcia accompanied me on this one. After my work was done, we stuck around for a couple of extra days, had some nice meals with old friends, and explored the city where we first met 30 years ago. While the iconic buildings and skyline remain mostly unchanged, the evolution of the city below that level was profound. When we lived there, for example, “14th Street and U” would have been the answer to the question: “Where do I get a hooker, a gun, some crack, or all of the above?” Now it’s a gentrifying neighborhood and the next “hot destination,” bridging quirky Adams Morgan and the ever-expanded heart of the downtown Mall area. Another example: I love me some Washington Capitals and Bullets, but I had no idea that their new (to me) arena was in the same general area where I used to go to amazing concerts through the 1980s at the very sketchy and smelly original 930 Club, at 930 F Street NW. We paid a pilgrimage to that site, where I once saw Butthole Surfers, Chuck Brown, Camper Van Beethoven, Fishbone, Black Flag, Root Boy Slim, Bad Brains, The Busboys, Minor Threat, Guadalcanal Diary, E.U., and so many others I can’t even remember anymore, and you know what we found?  That we could now buy sweaters. Sigh . . . 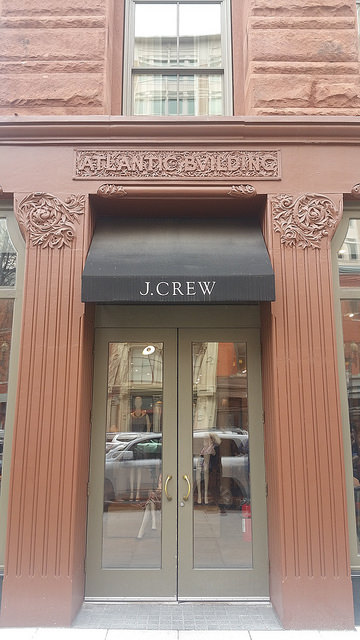 I can’t believe they got the smell out of the building.

On our last day in Washington, we decided to make a quick stop in to the new (to us) National Museum of African American History and Culture. There didn’t seem to be any lines, so we strolled up to the entrance as one does at most Smithsonian museums to just amble in, but the gentleman at the door explained that demand was so high that advance tickets were required, and there weren’t likely to be any available for the rest of that day, nor the day following. He offered some helpful tips on how to perhaps score a stray ticket or two, but it didn’t look like it was going to work, so I said “Thank you, sir, I appreciate your help.” As I was walking away, he said “Wait . . . are you a Veteran? You sound like a Veteran.” And I am, of course, as is Marcia, and so we were admitted under the museums Vets’ policy. Good manners and politeness pay off in unexpected ways. We only had an hour to explore, so we actually only got through one of five floors, but it was so amazing and so well curated and so exciting that we will definitely be going back again. The highlight of highlights for me? Turning a corner and seeing this unexpectedly . . . 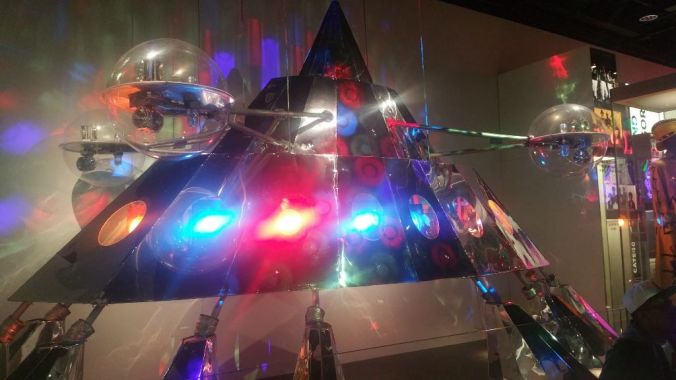 If you have to ask, you’ll never know, blah blah blah, but if you want to understand the significance of this iconic object, then sit down right now, click the next link, and watch the late Glenn Goins Calling Down The Mothership.

We also went to the National Air and Space Museum and normally I’d be falling all over myself to tell you about the rockets and planes I saw there, but even John Glenn’s Friendship 7 pales next to the experience of seeing The Mothership. Other snaps from our trip (including the obligatory cherry blossoms and a visit to the exceptional FDR Monument) are at my Flickr site, which you can reach by clicking the picture of the space nerd below: 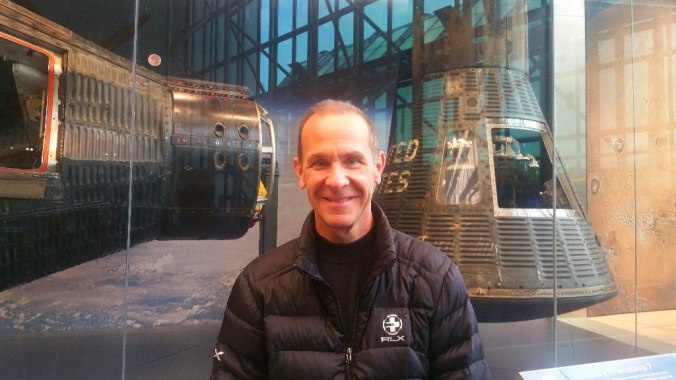 We were bopping around Washington on Friday as the healthcare vote debacle was unfolding, so it was interesting to see various helicopters and limousines racing back and forth between various key points in the city’s political infrastructure while the GOP did its best to punch itself in the face during its hot pursuit of political malfeasance. We both slept well that night, and let’s leave it at that, since I’m not intending to use my blog as political website, tempting as that may be. Besides, everything that really needs to be said about how things feel today in America is available in an extraordinary new video from Jed Davis and the mighty Hanslick Rebellion, linked below (language warning, NSFW):

I’ve been following Jed’s work since the ’90s, and have written about him many times here over the years. In short: I consider him to be one of America’s greatest songwriters, ever, and he’s got the instrumental chops, design skills, studio acumen, arrangement ear, and live charisma to make it all work in the studio, on the stage, in a box, with a fox, on a train, and even in the rain, in Spain. Get on over to his The Congregation of Vapors page now to discover what you’ve been missing all these years. It’s all genius, all the time, and the cast of characters who appear there with Jed (e.g. Chuck Rainey, Reeves Gabrels, Tony Levin, Anton Fig, Jerry Marotta, Avi Buffalo, Ralph Carney, Tommy Ramone, and many many many more more more) is mind-blowing in the extreme.

One thought on “Madness (Space and Otherwise)”