Marcia and I did a 1,200-mile long road trip over five days this week to visit two of our Nation’s more spectacular national parks: Arches (near Moab, Utah) and Zion (near Springdale, Utah). Katelin and John drove over from Las Vegas to meet us for the last couple of days at Zion, and we were able to celebrate their first wedding anniversary together, just a little bit after the official date. We had near perfect weather, and while crowds in the parks were larger than we like or are accustomed to, we know they were nowhere near as bad as they could be, so that was fine, in the grand scheme of things.

We drove up to Moab on Wednesday, taking the route through the Navajo Nation and past Monument Valley, with a stop at the Edge of Cedars State Park in Blanding, Utah. We generally enjoy the various museums in our region dedicated to native arts, history and culture, and this one was a particularly good one, with some excellent interpretative exhibitions, and an accessible, well-conserved ~1,000-year old kiva from an Ancestral Puebloan community partially excavated on the museum grounds.

After we had checked into our hotel in Moab, we  decided to have a nice pre-dinner ramble along the downtown greenway trail that parallels Mill Creek, and a few minutes into the walk were shocked to see the aftermath of a 100-year flood event that had devastated the low-lying regions of the city last month, unbeknownst to us. Large swaths of the trail were still impassable, so we just altered our amble to the retail district instead, then had the first of two really good meals we experienced during our nights in Moab, at Thai Bella. We rose before sunrise on Thursday to drive into the National Park (they have implemented a timed entry program requiring advance registration, so plan ahead before you visit), and got to pass some of the park’s more prominent vistas with beautiful dawn colors behind them. We hiked about 12 miles over the course of the day, seeing (or often passing through) most of the better-known arches. A good day, capped with our second tasty dinner at Sultan Mediterranean Grill.

On Friday, we drove down to Springdale, Utah, following the same route we had taken when we helped Katelin and John move from Des Moines to Las Vegas. It was much more pleasant this time, when it wasn’t 110ºF out, let me assure you. We had a nice dinner that night (are you detecting a theme?) at Dulivia, then got up early Saturday to catch the shuttle buses into the Scenic Canyon Drive at the heart of the National Park. A sizable chunk of the hiking area I’d hope to visit was closed due to rock falls in 2019 and continuing instability in the area, but we did get in about eight miles worth of trekking, which was beautiful, if a bit congested around the sites that get the most social media hype. We closed the last night of the trip with Katelin and John’s anniversary dinner at Switchback Grill, then after a lazy breakfast together, headed home, completing the big loop part of the trip near Tuba City, Arizona.

We felt like a full day in Arches was sufficient to get the experience of the place, but could definitely use another day or two in Zion at some point, especially if some of the closed trails in the Canyon re-open. Barring that happening, we’d probably focus our next trip on the less-congested, more-isolated flanks of the park east of the Zion-Mount Carmel Tunnel, and west along the Kolob Canyons. While I do certainly applaud the use of shuttles to minimize traffic and enhance conservation in the heart of the park, I can’t say I was fond of the experience of having to queue to catch them, nor of having each shuttle disgorging large loads of people with us when we exited, so that it became a race up the trailheads to get away from the less-experienced, and often obnoxiously loud about it, hikers. But that was, all things considered, a minor annoyance in a glorious piece of country.

And not to sound smug or self-satisfied, but this trip also furthers our appreciation of the place where we’ve chosen to make our home, as we’ve got some equally spectacular scenery and hiking opportunities within walking or quick driving distance. We know our home area well enough at this point to be able to partake in the best hikes and bask in the best vistas, often never seeing anybody else en route, because most online resources send most visitors to the same densely-packed photo op sites, which we generally avoid accordingly. Our visits to Arches and Zion also hammered home my sense that hikes and climbs to high, edgy destinations are much better when you’re not having to be constantly vigilant about selfie-shooters falling off cliff faces or knocking others down in their pursuit of the perfect Instagram shot. I’m very comfortable doing high elevation, exposed hikes with small groups of people I trust, but I find it pretty deeply uncomfortable to be in such places with people running along ridge edges in flip flops or clambering out on cantilevered rocks and ledges to get the perfect shot or just generally being oblivious to the safety of those around them, and the care and preservation of the sites attracting their attention. Harrumph.

No surprise, but I snapped a lot of pictures on the trip, as did John and Marcia, and I’ve put a collection together which you can check out, should you care to, by clicking on the photo below of Delicate Arch, one of Utah’s most iconic visual images. Note that no other human beings were put at risk by my photo-making activities, nor were any natural sites despoiled. Those aren’t hard outcomes to achieve, with some self-awareness and care, and some basic respect for the experiences of others. 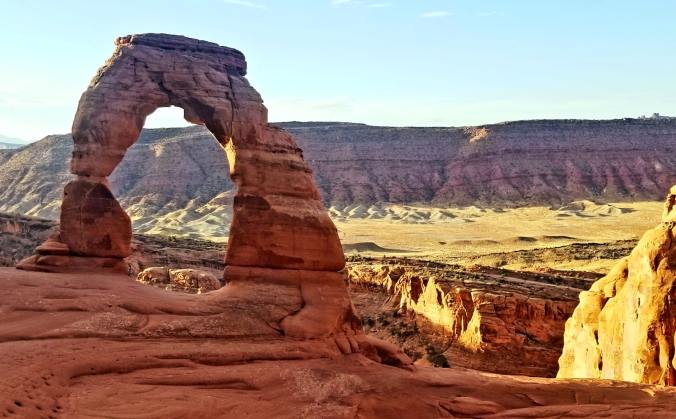