My father died twenty years ago today, shortly after he was critically injured by an elderly driver who blacked out behind the wheel of his car, leading to a head-on auto accident. Dad died in the same hospital in Beaufort, South Carolina, where I had been born some four decades earlier. He was not conscious when I arrived at the hospital, and he never regained consciousness, though my mother and sister and I (plus a close family friend) were there with him when he left the troubles of this world behind and flew away.

In the brief period after the accident while he was still able to communicate with us, Dad watched from his hospital bed while his beloved North Carolina State Wolfpack stomped my own alma mater Navy’s football team by a score of 65 to 19. The last time that we spoke, by phone, we talked about that game, despite his morphine fog. I’m glad he got to see it. The last words he heard from me on that phone call were “I love you.” We’re one of those families that ends pretty much every phone conversation or written communication with those words, because you never know what tomorrow might bring. In this case, tomorrow brought something awful, so having said that was important to me.

We ran this memorial on the 10th anniversary of my Dad’s death. Time flies, and it doesn’t ever move backward.

The day after my father’s death, we were all engaged in the sad business associated with funeral arrangements and announcements and such, precisely as the one-year anniversary of the September 11 attacks were being marked around the country, adding a surreal extra layer of national grief and loss to our own personal mourning experiences. I delivered the eulogy at my Dad’s funeral a couple of days later, having crafted it quickly on his old computer in his old office, reading from a printed hard copy that, alas, I did not save after the service. But I believe I’ve recreated and summarized the gist of my remarks a few times over the years, and they went something like this . . .

Colonel Charles R. Smith, Jr., (July 29, 1939 – September 10, 2002) was born and raised in the small Piedmont mill town of Albemarle, North Carolina. He attended and graduated from North Carolina State University before being commissioned in the United States Marine Corps in 1961. He served on active duty for 28 years, retiring as Chief of Staff at Marine Corps Recruit Depot, Parris Island, South Carolina, then going on to career in ministry as the station manager and on-air personality for the largest Christian radio station in South Carolina’s Low Country.

My father was a combat veteran of both Vietnam and Lebanon, and was handsomely decorated for his service over the years, earning The Legion of Merit, The Bronze Star (with combat V), The Meritorious Service Medal (three awards), The Navy Commendation Medal (with Silver Star), The Marine Corps Expeditionary Medal (two awards), The National Defense Service Medal, The Vietnam Service Medal (with four stars), The Humanitarian Service Medal, The Vietnam Cross of Gallantry (two awards, with Silver Star and Palm and Frame), The Presidential Unit Commendation (one star), The Combat Action Ribbon (one star), The Republic of Vietnam Campaign Medal, and The Lebanese Order of the Cedar. He’s one of a very small number of non-Lebanese citizens to receive that last honor, granted to him for his peace-making work as Marine liaison to Ambassador Philip Habib, a crucial and meaningful side duty while he was serving as Executive Officer of the 32nd Marine Amphibious Unit in Beirut in 1982-83.

While the biography that can be gleaned from my father’s list of medals and ribbons was an important part of who and what he was, there was obviously more to his life than the details of his military accomplishments. Dad was well educated with a pair of Masters Degrees, and he spent much of his life as an educator, either directly (as a school teacher, later in his life) or indirectly (as a mentor, storyteller, sage, and church elder). He was a man of great, deep faith, who touched countless lives through his ministries. He was also a “foodie” without pretense, who could just as easily appreciate a good chili dog as he could a fine meal at one of the world’s great restaurants. He was a loving husband to my mom, a great dad to my sister and I, and a doting grandfather to my daughter, niece and nephew.

But I think what I miss the most, when all’s said and done, is the fact that he was really quite the goofball much of the time, and was a lot of fun to spend time with. He had an infectious laugh, and loved to tell tall tales and stories; the truth was malleable for him, and did not necessarily have to correspond to reality. (The excellent Tim Burton movie, Big Fish, could have been his biography). He also found humor in all sorts of places where most folks didn’t look for it. I remember one time when my sister and I were young and our Mom was away for some reason, so Dad was left with the responsibility of making dinner for us. He spent a long time in the kitchen that night making a very special dinner for us: A Spam Lamb (for my sister) and a Spam Ram (for me). Both of them were anatomically correct, ahem.

We laughed and laughed and laughed through our dinner, and meat from a can never tasted as good as it did that night. Later, I watched him make his grandchildren laugh just as hard as he did his children, which was lovely, and powerful, and memorable. I will miss that, a lot. I know I’m not alone in that regard. 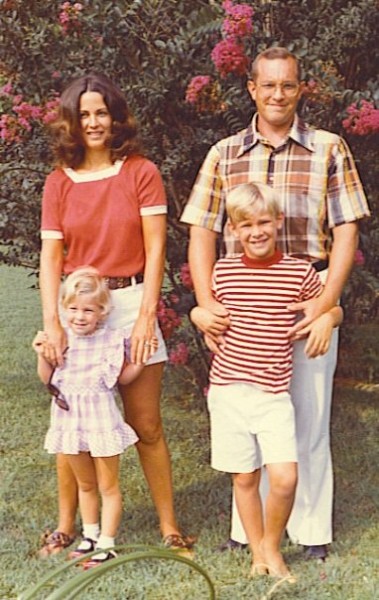 It’s hard to believe that it’s been twenty years since I first wrote and delivered some version of those words. Some days, it seems like a lifetime ago, since so much has changed since then — but other times, it feels like yesterday, since I remember it all so vividly, down to the tiniest details that usually fade with time. A couple of years after my father died, I was asked to contribute an article for a “summer special” edition of the alternative newsweekly for which I wrote, describing unique or lasting memories of the year’s balmiest season. I think that was the first time that I formally put pen to paper (proverbially speaking) after the funeral to try to capture the experience of time spent with my Dad, and then the experience of the days after, without him. Here’s a link to that article, if you’d like to read it.

We were in Santa Barbara this summer on what would have been my Dad’s 83rd birthday. I got a good beach hot dog in his honor, though my Mom correctly pointed out that it should have had greasy chili sauce and mustard and way too many onions on it to properly replicate his preferences. Urp.

I miss my Dad, at bottom line, all these years on, and I rue the fact that he was not with us in the flesh to share in so many amazing experiences over the past two decades. And, thus, I must make the public service announcement that I offer pretty much anytime I mention my father online: if you know an elderly or infirm driver who is no longer capable of safely operating a motor vehicle, you really need to graciously, yet firmly, facilitate and support that person’s transition to a non-driving state. The man who killed my father walked away with a sprained wrist, while our lives were irrevocably changed, forever, for the worse. You don’t want your own loved ones to be responsible for doing that to somebody else’s family. So take the keys when it’s time to do so, please and thanks.

One final closing memory: I think I inherited a strong penchant for taking dubious shortcuts when driving or hiking or biking from my Dad, as part of both of our penchants for wanting to see how things connect, even if the shortest path between Points A and B is a dirty and dangerous and stupid one. I remember one time when I was a kid, probably of the age shown in that family photo above, and my Dad and I hiked up Morrow Mountain in the Uwharries of Central North Carolina. You could drive to the top of the mountain by car, or walk up along the road, taking advantage of the many switchbacks. Or you could just clamber straight up the steep faces between the switchbacks, although the park rangers probably wouldn’t have much cared for the third choice. So, of course, that was the one we chose. We made it to the top, so all’s well that ends well, but it wasn’t one of our brighter father-son outings together. Oh well . . . I guess if we’d just walked up the road or driven to the top, I wouldn’t have written this sonnet about that day, some 30 years after it happened:

The serpent switchbacks cut the mountain’s side,
each hairpin turn just higher than the last.
Straight up, between the curves, a gravel slide,
where trees were felled by avalanches past.
Both slide and road went to the mountain’s peak,
one paved and winding, one more steep, but straight.
We stood there at the bottom, by the creek,
and chose the rock slide without much debate.
We scrambled up the loose slate, crossed the road,
and climbed the next pile, careful of sharp shale,
bypassing slippery spots where moisture showed,
ignoring man-made paths for nature’s trail.
Exhausted when we finally reached the top,
amazed, on looking back, how steep the drop.