1. September? It’s September already? Only three weeks until the equinox? Yeesh. That snuck up on me. We’re greeting the month here in Northern Arizona (and most of the American Southwest) with some extremely hot temperatures again, and they feel even hotter than usual after a month of good monsoon, as discussed (with photo and video support) in my last post.  Hopefully everybody’s 2022 is going better than most of our 2021’s and 2020’s went, but if not, take heart: September 1 marks the “twice as far behind as yet to go” point for the year. Which reminds me of a poem I wrote a decade and a half ago, during a year when I was publicly committed to writing a poem a day for a year:

2. Through a series of fortuitous connections, I’ve fallen in with a group of serious hikers who go out every Monday morning on the types of treks that I really like, typically involving beautiful (but obscure) destinations, frequent bushwhacking in the back country, and fairly strenuous climbs and descents. The group also has a great appreciation for the proliferation of Native American rock art and ruins scattered throughout this region, most of them left behind by the people dubbed The Sinagua by Europeans and Americans who later settled the region. The Sinagua left this area en masse around 1425 AD, so whenever you find their remains, you know you’re looking at something that’s at least 600 years old. I’ve posted a variety of images in my various photo series over the past two years sharing some of the public and obscure sites that I’ve visited, but on this past Monday’s hike, our group went to one of the most amazing Sinagua art sites that I’ve yet seen. I posted some shots from that hike over at my Flickr site, and you can click on the image below to see the remainder of them.

3. You may note that I do not disclose the location of the site in that photo album, and that’s generally been the case for any native sites that I find or visit hereabouts, excluding the ones that are readily open to the public under Forest or Park Service administration. I have increasingly come to believe that over-sharing on the Internet is destroying the experience of visiting sites like these, or high-profile natural locations, and I’m routinely annoyed at finding sites online with detailed descriptions making it relatively easy to find things that would be better-to-best experienced by having a knowledgeable and respectful local help you to see. (This applies to lots of things, actually. I’m equally bemused/appalled to see long lines at restaurants in towns where I have lived that locals consider marginal at best, but which for some reason have incorrectly convinced Tripadvisor or Yelp or whoever of their supposed excellence). That sense of annoyance about disrespectful visitors is even more exacerbated when I encounter people near or at these sites who are fundamentally unprepared to get there and be there, stereotypical case in point the time when I met a female “hiker” wearing yoga clothes and ballet slippers, dragging an out-of-shape photographer behind her carrying a massive equipment bag, but not much water. It was clear that her top priority was getting a fabulous Instagram-type influencer photo with professional assistance, and while I was going the other way and did not see the actual photo shoot, I can easily imagine her standing on or laying hands on things that should not be climbed nor touched. Now, don’t get me wrong, I love taking pictures (duh) pretty much everywhere I go, but the focus of the pictures is not on me looking fabulous, nor is it to provide a roadmap for strangers to follow, only a documentation of what I’ve done, because I’m a list-making, documentarian kind of guy. Be clear: I would be thrilled to take any friends or anybody who reads this site regularly up to these sorts of Native sites to see (but not touch) them, just as I was thrilled when others took me there for the first time. But I’m not going to use my website to make it possible for strangers with questionable intentions (to my views, anyway) to get there.

4. You might have noticed the owl in that photo album, if you visited it. I was leading the way in trying to find a path up to mesa we wanted to summit, and dropped down into a mostly dry wash to get some easier walking space. I came upon a small pool of water, and as I was looking for a way around it, what I thought was a rock turned its head and stared at me. Ye Gods! I figured I’d be lucky to get a single photo of this handsome fellow before he flew off, but he (using that gender neutrally, as I can’t bring myself to refer to sentient animals as “it”) was oddly calm and let me and my group (once they caught up to me) admire him. We were a bit worried that he might be bit under the weather given that odd behavior, and had we found him somewhere less remote with phone service, we might have called Animal Control to see if he needed rescue and rehab. But I’m cautiously hopeful that he was, perhaps, just a juvenile who had not yet encountered humans and so did not know to be frightened of us, if we made no threatening moves toward him. We walked on after a while, and I’m telling myself that Mr Owl had a nice rest, got a good sip of water, and then has continued on with his business, living his best possible owl life. As for us, the remainder of our hike got strenuous even by our standards, as we ended up in a blind wash and had to climb our way out through a dense half-mile, filled with cat’s claw acacia, agave, prickly pears, and other pokey, bitey, spiny flora. I looked like something out of a serial killer movie by the time I got home, every bit of exposed skin scratched to pieces. And I didn’t get the worst of it among our crew. Here’s hoping we find a cleaner path next week.

5. On the topic of hiking destinations filled with obnoxious “hikers” around here, the worst is absolutely Devil’s Bridge, a natural arch that’s relatively accessible, and is extremely highly documented on the web. I generally avoid it at all costs, because I’m averse to having to park a mile away from a trailhead, walk along the side of a busy road, and then embark upon a hike that culminates in a point on a trail where there’s a long line and a half-hour wait as people take turns walking the arch and posing for the “perfect” photo, that looks exactly like every other “perfect” photo taken there. That’s just not my idea of a good commune with nature. But a couple of weeks back, my hiking group was in the general vicinity of Devil’s Bridge, and our planned hike turned out to be a little shorter and easier than is our norm, so we decided to take a back route up to Devil’s Bridge just to add some steps to our schlep. We got up to the point where you can walk across the formation, and there was the usual throng of posing folks there. Meh. I had no desire to have the stereotypical Devil’s Bridge photo of me taken, but I did have a desire to document my explorations, so I elected to get what I think is a better shot of the formation anyway, climbing down to snap it from the underside: 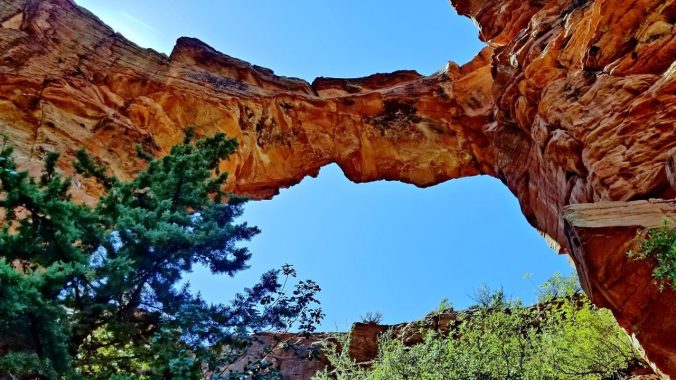 Pretty cool, huh? From that vantage point, it was impossible to see the assholery going on up top, and that was a nice win from my perspective.