1. This past Sunday afternoon, I started to feel very crummy, very quickly. By the time I went to bed that night, I had extreme body aches and was running about a 102º fever. Obviously, given the times we’re living in, I presumed that COVID had finally caught up with me, so I took a home test. Negative. Did another on Monday night. Also negative. And one this morning, negative yet again. Today is the first time that my temperature has returned to its usual lizard-like 97º, and nothing’s hurting much at the moment, so I think whatever it has been, it has hopefully run its course. I never had any other symptoms besides fever, muscle pain, and the fatigue that both of those things bring. It occurred to me that I had been outside quite a bit on Friday and Saturday, and had gotten chewed up pretty good by the mosquitoes that swarm here as the monsoon kicks into high gear. So I’m kind of thinking now that I’ve had something like West Nile Virus, which is endemic here in Arizona, with case numbers typically peaking right around this time of year. Hopefully no long-term impact from it, whatever it is. Or was, fingers crossed.

2. Speaking of monsoon, as evidenced by all of the photos I post here, we’ve got incredible views hereabouts, but they get even more spectacular when you add an active atmosphere to the mix. Here’s a few snaps taken over the past week when light, water, and landscape combine to evoke “wow” moments:

3. And speaking of “wow,” as if on cue, just as I posted those pictures, a huge thunderclap sounded and the heavens opened up. Here’s what it looks like out the front door right now. The plants are loving the wet season, as you can see: 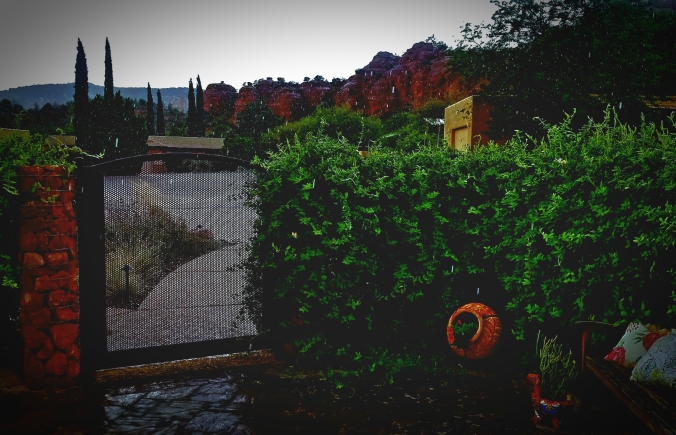 4. Okay, this wasn’t really intended to be a weather-centric article, but after I posted the prior photo, the hail started falling. It didn’t seem wise to go out into it, but here’s how it looked from inside blowing up against our back door:

5. We have “barrancas” (small gorges, which are normally dry) running along two sides of our property. As the intense storm began to abate, I went out to check on the yard, and the barrancas were most decidedly not dry, per the following video:

6. Ummm . . . I had some other tidbits I was going to share in this omnibus post, but y’know what? I think I’ll save ’em for next time. There’s yard work to be done and gutters to be cleared, right now . . .

8 thoughts on “On The Rebound/Waters Flowin’”