1. Marcia and I made a brief return to the Grand Canyon this past weekend. We wanted to get some hikes and exploring in, but we weren’t quite ready to do a trek as heinously difficult as the one we did last October. So instead of carrying our tents, bedding, and food down into and back out of the Canyon, we elected to stay at the Under Canvas resort some 20 miles south of the Park Boundary, and it was a delightful experience. Yeah, we slept in a tent, but we didn’t have to carry it. And it had a wood stove, which was helpful when the temperatures dropped to 29°F on Friday night. We ate breakfast and dinner in Under Canvas’ main tent, twice each, and the food quality and ease of ordering and service were both outstanding. We also had live music out under the stars each night, while we made S’mores over the propane fire pits, and it was a nice place to just sit around when you didn’t feel like doing anything strenuous. We’ll do that sort of trip again, for sure. (They’ve got several other locations around the country, so we’re already scouting them out). For our Grand Canyon hike, we elected to take the South Kaibab Trail down to Skeleton Point, down some three miles horizontally and 2,100 feet vertically from the South Rim, just far enough to get a first peek at the Colorado River, waaaaayyyy further below us. (It made our minds boggle that we actually went all the way down there last fall, and then hiked back out, with 30-pound packs). This past weekend, we made it down to Skeleton Point in about 90 minutes, and back out in about two hours, the latter trip slower not only because of the vigorous climbing, but also because of the temperatures, which approached 100°F, with the sun’s position offering paltry shade as we hugged the cliff walls on the way up the various switchbacks. The next day, after a lazy morning, we headed back toward Flagstaff and hiked up to Red Mountain, a really distinctive and cool collapsed volcanic formation. I snapped some pics, as I do, and you can see them by clicking of the sample photo below, taken at Cedar Ridge, about halfway down to Skeleton Point. . . 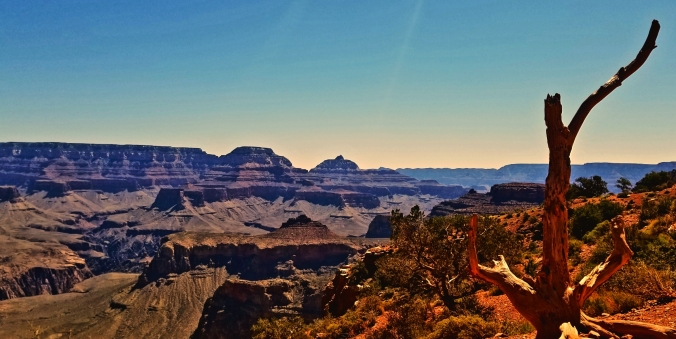 2. For our final years in New York and our first couple of years in Des Moines, I used to go out golfing with Marcia fairly regularly. She’s good at it, I’m not. But during our first stint in Iowa, I just got really tired of not only doing something that I couldn’t excel at, but also of the truly obnoxious “golf bro” culture that was so prevalent on courses there, public and private alike. So I quit golfing at that point, for those and a variety of other reasons. Fast forward to this spring, when for a variety of other, other reasons, I’m going to take it up again. I played nine practice holes yesterday and another nine today. I’m still not good, but I was pleasantly surprised how much muscle memory I maintained from having done it all those years ago. We’ll see how it all plays out. I think the fact that we now live in a place where you can play year ’round, and the fact that there’s a course at the end of our road, and the fact that this is mostly a lower-key, bro-free, retiree-laden community, hopefully will mean it’s easier to go out and have a good experience without having to be rushed by or listen to a shouty gaggle of drunken, cigar-smoking, racist/sexist louts trying to channel their inner John Daly. And I’m always happy to have the extra time with Marcia, so that matters too, a lot.

3. Another back to the future note: when the first Roomba robot home vacuums came out, I had to have one. But we found that the size of our house, and the fact that we had three cats, and the buggy early versions of that particularly home technology meant that our first Roomba didn’t get much done before gagging on cat hair and then spending an hour desperately cleaning and re-cleaning one table-leg until its battery ran out. A few months back, though, Katelin and John told us they had gotten a new one, and that the newer technology version seemed to be working well for them. So we gave it another try with a second Roomba, and I have to say that it seems to be working well for us this time. I can send the helpful little robot out from my phone while we’re out of the house, and so far, it just does its thing, and then properly takes itself home to its little docking station once it’s finished being useful. When I set up the account for the new helpful beastie, I had to give the unit a name. It didn’t take me long to settle on Tarkus, and if you’ve been reading here for any amount of time, you’ll probably know why that is. I put a sticker of his eponymous armadillo-tank on Tarkus’ shell, so he’d know who is he, and when he does a particularly good job at his assignments, I’ve taken to giving him a little reward for his good work and service . . . 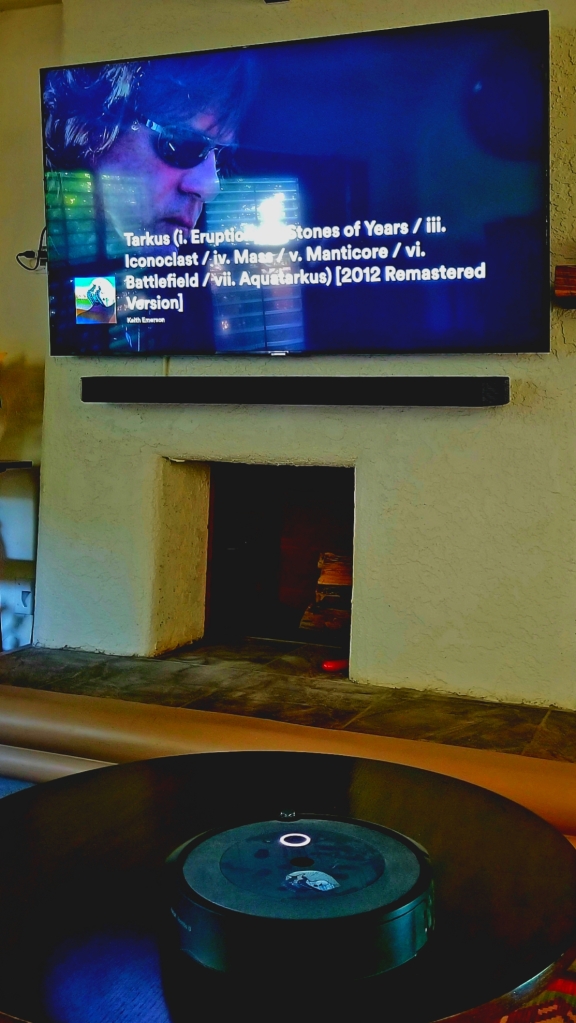 Clear the battlefields, and let me see . . .

4. I was sorry to read that Scottish guitarist Ricky Gardiner passed away this week. He was a core member of the interestingly odd Beggars Opera in the early 1970s, before a brief, but high-impact stint with David Bowie and Iggy Pop, appearing on the landmark “Berlin Era” albums Low and Lust for Life. His most lasting contribution to the core rock canon was his amazing riff and music for “The Passenger,” a critical, crucial song in the twinned journeys of Iggy and David at their most enigmatic and experimental. Iggy’s touring band in support of Lust for Life featured Bowie, Gardiner, and the Sales Brothers (Hunt and Tony) rhythm section, and those shows are arguably among the all-time most legendary live rock events, ever. Ricky Gardiner continued to write and record in a variety of genres until his failing health rendered him finally silent. He was a player, for sure, in the true and best sense of that word. Here’s a nice video for “The Passenger,” if you want to hear why that was the case . . .