1. I posted a few weeks back about my annual NCAA Men’s Basketball Tournament pool, which I usually lose in embarrassing fashion, in large part because I over-think things, and make insider-knowledge, micro-aggressive picks that have little to no basis in the macro reality of the sport and its players. This year, though, I actually won my little group’s bracket pool (!), solely because I was the only person to pick Kansas to win the national championship. For perspective, in most standard pick ’em pools, the maximum number of points possible is 224 (32 points per round, over seven rounds). I won my group with but 95 points (42% of the possible best), probably demonstrating less my adeptness at picking outcomes than the general weirdness of this year’s tournament. Had North Carolina held on to defeat Kansas in the championship game, my sister would have won our group. I duly chastised her for picking the detested North Carolina Shitheels, since we’re from a long and devoted North Carolina State Wolfpack family (our grandfather, our father, and her husband were/are alumni there). Snarking ensued. It would have looked like this, had we been together to do it in person: 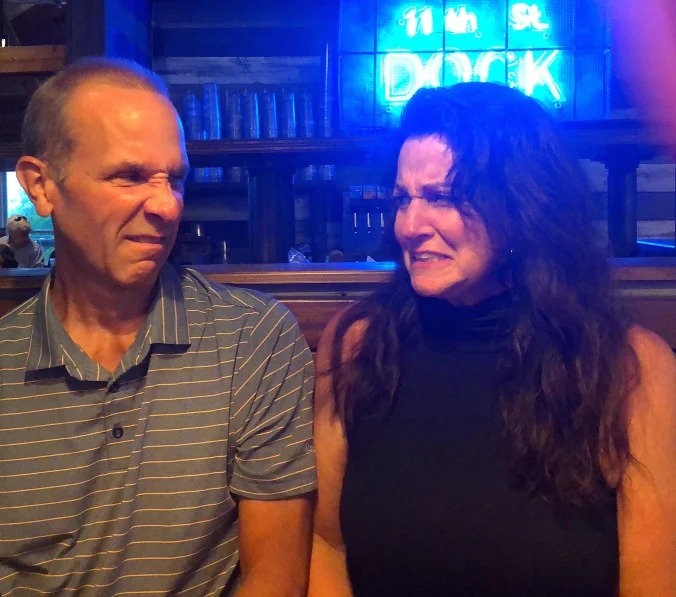 2. I also recently posted my picks for this year’s Academy Awards, as I also do on a (nearly) annual basis. I didn’t expect CODA to win Best Picture, but I was happy that it did. It is a glorious, wonderful film. There might have been tears involved when I watched it. But I am sure it was just allergies, ahem. I was also happy to see Jane Campion finally win an Oscar for directing The Power of the Dog. She’s great. Even before the now-infamous awards show slap, I was actively opposed to seeing Will Smith win the Best Actor award for King Richard, just as I was actively opposed to his nomination for playing one my deepest personal heroes in Ali. I don’t dislike Will Smith, particularly, but I also can’t get myself interested in the biographical roles that he plays. I was also “meh” on Jessica Chastain winning Best Actress for The Eyes of Tammy Faye, though I expected it. The role seemed more like a triumph of hair styling and make-up design than it did a triumph of acting. That said, I do recognize that I’m probably among a relatively small number of diligent contemporary film buffs who was also regularly exposed to the real Bakkers and PTL Club, having been raised in a deeply devout, television-watching family. Film elite voters are always impressed when film elite actors play mildly-laughable country cracker types, but as a one-time mildly-laughable country cracker myself, I tend to find that urban sophisticate “Oh, these rural folks are so quaint and charming and funny and simple and wise, despite themselves” vibe to be often condescending and offensive. Oh well. At least they didn’t give Lady Gaga an acting Oscar. That really would have rubbed me the wrong way, had they done that.

3. Still on the Oscars, I was utterly appalled by the nominees and the winners of the Best Song and Best Score Awards, given that the masterfully musical Annette by Sparks and Leos Carax was completely ignored on the award-giving front. There’s no question in my mind that the finest song to appear in a film in 2021 was “So May We Start,” from Annette, which actually featured in the film, meaningfully, and also featured cast members singing, unlike most of the utterly dreadful nominated songs, which were mainly just shitty fluff tacked on to soundtrack the credits, opening or closing. (The nominated Van Morrison song from Belfast was an exception to that rule, but I loathe Van Morrison with a passion, so that point was somewhat moot in my own mind). Annette‘s score was also sublime, as opposed to the bloat-by-numbers bullshit that the tiresome Hans Zimmer loaded up upon the already intolerable and soul-lacking Dune, which won the Oscar. Bleh.

4. I generally feel just as foul when it comes to the Grammy Awards, where one would think that the voters would actually know and understand music, since that’s what the awards are for, for God’s sake, unlike the Oscars, where the music is a minor side-light. But their choices, too, are often inexplicably awful, in years where there is inexplicably great, even popular, music being completely ignored. That said, I was mildly surprised and pleased that Silk Sonic won the Song of the Year and Record of the Year Grammy awards last week for “Leave the Door Open,” from the group’s debut album, which featured on my Best Albums of 2021 list. It’s a funny and sweet piece of post-Philly Soul, organic and “real” in ways that so many popular recent examples of assembly-line pop-by-numbers can never begin to replicate. If you don’t know it, it’s worth a quick spin, as is the rest of the album that spawned it:

5. The 1950 American Census data was released on April 1 this year for free search and discovery. You can dig into it here. I found both of my parents (then children) in the data, among other family members. Here’s my Dad’s family (the only Smiths on the page), and here’s my Mom (her surname was Waters). Nothing show-stopping in either of those reports, but still interesting to see what their respective neighborhoods looked like at the time, and how my grandparents described their work and educational experiences.

7 thoughts on “One Way Or Another”