1. Marcia and I have been getting our healthcare insurance coverage for the past 18 months via the COBRA program, which allowed us to receive benefits as part of the last healthcare policy group she’d been a member of at the point when she retired from full-time work. But as our eligibility for that program came to its end, we visited the Federal Healthcare Website to see what our options were for the year(s) to come. We found a very good plan at a very reasonable price with a very nice Federal tax subsidy associated with it, and enrolled in said program accordingly this week. Thank you, President Obama, for that. We appreciate you, always. And we miss you!

2. Bauhaus were a tremendously influential and much appreciated band for me through most of the 1980s, and their successor bands (Love and Rockets, Tones on Tail, and solo projects by members Daniel Ash, David J, and Peter Murphy) kept me rolling in good music for years-to-decades after their original collective creative run petered out. I had read that the original quartet were on tour again this year, but was surprised when they issued a new single (the first new music they’ve released in 14 years) a couple of weeks ago, called “Drink The New Wine:”

The music media have been much impressed by the song’s origins, created via the surrealists’ game trope “exquisite corpse,” in which each of the group’s four members recorded their segments of the song independently, without having heard the other three members’ contributions. The results are shockingly coherent, but, then, that’s the point of the game, in that brilliant collaborative newness may (and in this case, does) emerge from the chaotic creative process behind the work.

But I’ve not seen (m)any members of the critical community recognizing that this is not the first time that Bauhaus have hoed this row, with one of the best songs from one of their best albums (The Sky’s Gone Out, 1982) being titled “Exquisite Corpse,” and being created under the same rubric. Here’s how that one sounded; it’s a personal fave:

Note well that the title of the new song makes it something of a sequel to the title of the earlier song, as they evoke the original surrealist quote penned by André Breton, Marcel Duchamp, Jacques Prévert, and Yves Tanguy: “Le cadaver exquisite boar le vin nouveau,” which translates in English to “The exquisite corpse will drink the new wine.” Bauhaus (the group) also deployed this creative technique on a fairly rare b-side, where they titled the track with the band members’ names and the order in which said members created their contributions to the cut in question:

Always happy when artists I admire and respect return from long hiatuses with works that are challenging, yet anchored in their core creative values. Here’s hoping that Messrs Ash, J, Haskins and Murphy continue to make new music under their Bauhaus imprimatur. It’s a good one. I miss it.

3. We finished watching the first season of Our Flag Means Death last night. I’m all in behind the brilliant Taika Waititi, and will pretty much happily watch anything and everything that he does (except for his Marvel Universe Movies, because I boycott superhero and Marvel Universe Movies as a point of principle, as I think them a tired and sore blight on our modern culture) (but I don’t mind Taika making them, if they fund his original work), but even with that expectation for excellence, this series went in ways and places that I’d not imagined it going, and it was all fantastic. Here’s the trailer, as a tease, and I most emphatically recommend it to you:

I’ve read a lot of reviews and analysis of the series over the past few weeks, but few writers seem to have picked up on something that I knew going in, as a fan of the sorts of “tales of human suffering” books that tell stories like this one: lead character Stede Bonnett (played by Rhys Darby) was a real, historical character, who did indeed serve with the legendary Edward Teach (a.k.a. Blackbeard) for a period of time. Because my brain is somewhat broken, I found myself playing this musical version of the Blackbeard story on my internal mental jukebox for hours on end, the ear-worm factor in full, florid display:

4. I’ve written at length here over the past 18 months or so about the amazing natural beauty of our home region in Northern Arizona, and its exceptional geological history. I’ve written less often about the human history of the region, but it’s fairly incredible in its own ways. One of the cooler factors about rambling about this part of the country is finding petroglyph sites, where ancient humans left their marks by carving both decorative and utilitarian works of art in the region’s red rocks, often darkened black by microbial growth and aged lichens. I paid a second visit to one of the less known, but visually spectacular, petroglyph sites in our area this week, deeply enjoying these most cool art works, all by my lonesome: 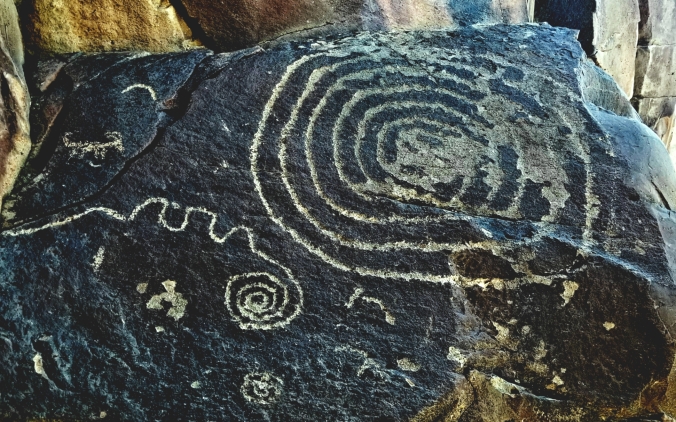 When we’ve read or heard talks about the ancient cultures of our region (most notably the Sinagua People, who left the area en masse around 1400 AD), the writers or park docents do tend to focus heavily on the practical aspects of the places where the Sinagua settlements were developed, but I believe deeply that our ancestors were just as attuned to aesthetic “location, location, location” concerns in their own ways as we are in ours. Yeah, you needed safety and food and shelter and water back then when you decided to pitch camp or develop a settlement, sure, but I’d bet good money that the folks who carved these figures, and others in the area, also sat down at the end of the day, looked out before them, and said “Dang, this sure is a nice spot!” Here’s the view of this site, just before arriving at the rock carvings. Nice spot? Yeah, it is. Definitely.