A childhood friend of mine, Rob Heinsoo, has had a long and successful career as a game designer, including serving as lead designer for the Fourth Edition of Dungeons and Dragons, and as co-designer of the acclaimed 13th Age series. Rob and I were next-door neighbors when I was in sixth grade in Fort Leavenworth, Kansas, and he and his brother (another Eric) had a stellar collection of board games at the time, which we played regularly. I still have fond memories of playing a particular race car game and a war game based on the historic Battle of Jena-Auerstedt with Rob and Eric. And I was actually among Rob’s first victims when he designed his first dungeon using the famed First Edition Brown Box of D&D, per this interview. I still smile without guile about the school for dragons when reminded of that particular experience.

More recently, Rob has designed a newly-released card game called Wrestlenomicon. Old Gods, kicking ass. What’s not to love? The game’s production was crowd-funded via Kickstarter, and I did my part to support its release. I received my copy in the mail today, and am most pleased to find that I am actually a small part of the game itself, appearing as a Cultist in the card pack, per the photo below (me in the center): 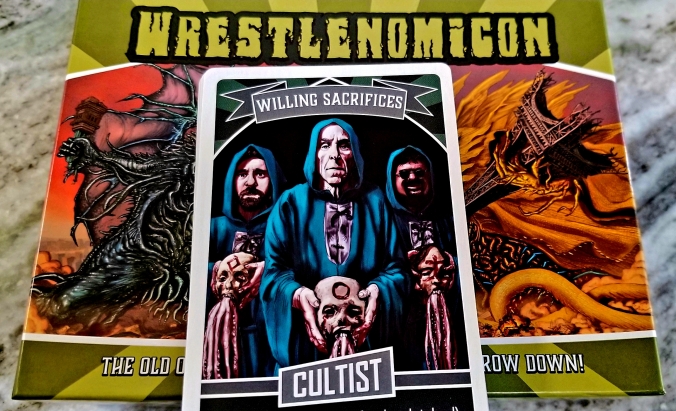 I know I’m somewhat cadaverous looking, but hadn’t realized that could be an asset from a graphic design standpoint when it comes to designing a game like this one. Mad props to brilliant artist Kurt Komoda for his work on the deck. I love my own card, of course, but there are dozens of deliciously, exquisitely, entertainingly horrific images to be found on every other card, making them fascinating as little works of art, independent of the game-play roles and values. I recommend you visit Kurt’s website, here. It’s a dark delight, well worth a trawl, and I’ll be keeping an eye out for new work from him.

If you love gaming (and who doesn’t, really?), I do hope that you’ll click the image above and follow the links to order your own copy of Wrestlenomicon. Be sure to grab the expansion pack of bonus cards, if you’d like to have my not-smiling visage as part of your game nights, once they’re safe to hold again!

Later Edit: Huh! I’m also on the header of the official Wrestlenomicon Facebook Page, here and here. What a hoot!