Marcia and I are in Las Vegas this weekend, visiting Katelin and John. The trip out was our first foray through airports since March. If you had told me a year ago that I ever would or could ever get on a commercial airplane looking like this, I’d have bet good money against it.

The Des Moines airport was not very crowded. There should have been plenty of room to safely socially distance in the terminal while awaiting our flight. But, of course, Iowa’s elected officials have done a terrible job in setting examples and providing rules for the Anno Virum, and many of the State’s residents have embraced that lethal disrespect for others that oozes down from above. So we experienced aggressive jerks at the airport invading other people’s safe personal spaces, and/or refusing to understand that a mask worn over your chin and neck is not really a mask at all. As, frankly, we expected. Sigh.

After six months mostly at home or on the road with just the two of us, being readmitted to the nattering noise of large numbers of other humans was jarring and very unpleasant: TV’s and flight announcements blaring, idiots watching movies on their laptops without headphones, other idiots having shouted conversations into their phones. People can really kinda suck sometimes. No wonder social distancing hasn’t over-burdened me on a personal day-to-day basis, beyond being bummed about not being able to see family members and travel freely, and annoyed at people being stupid about basic personal protective measures. Hermitic misanthropists like me are well programmed for days like these, I suppose.

Since getting to Nevada, though, things have been most exceptionally pleasant. Katelin and John’s house and park-like yard are great places to hang out, and we have done some wonderful walks. The best one took us up over a 7.5 mile route to just under 10,000 feet of elevation, to visit the subject that inspired this post’s title: a 3,000+ year old Bristlecone Pine known as Raintree, the oldest known living thing in Nevada. Here’s a snap of me with that venerable sylvan old-timer in her ancient grove, just for a sense of scale. (Click to enlarge, if you’d like). 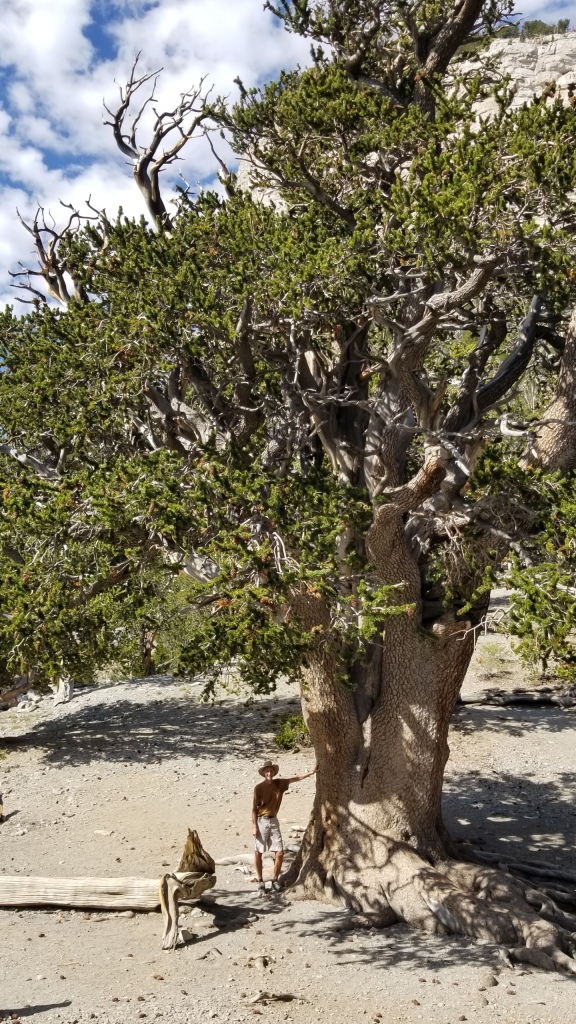 Pretty freakin’ incredible! Well worth the strenuous hike. Marcia and I are headed to Flagstaff, Arizona later today for the rest of the week. It is on the (very) short list of places where we hope we may find our retirement home later this year. It is a good deal cooler there than the 115° F temperatures we have been experiencing around Las Vegas, so that will feel refreshing too.

More pics and reports later this week or next when I am at my computer. I am posting right now from my phone, so apologize in advance for likely fat-fingered typos!

5 thoughts on “Old and Out of the Way”