If you’ve read my piffle and tripe here for any period of time, it probably does not come as a surprise that I actively enjoy a lot of music that most folks would judge to be “weird,” or worse. One of the side effects over the years of possessing such off-the-beaten-path tastes is that many of the things I like are hard-to-find or harder-to-replace, being released by small labels, or in limited quantities, or under otherwise sub-optimal commercial circumstances. Such is the lot of the quirky and difficult to please.

Admittedly, the Internet Digital Media Era has reduced many of the difficulties associated with securing my most extreme or obscure audio fixes, since artists can now essentially release their own materials directly to their own specialized audiences in whatever quantities the market will bear. But that has not always been the case, so throughout a lifetime of listening, one of the prime factors fueling my resistance to embracing new music-playing technologies is the fact that under new paradigms, the volume of artists issuing music under the emergent formats is much smaller than the volume available under the old formats, until such time as the consumer transfer achieves a critical mass that places the former paradigm into a state of obsolescence. (Not to mention the costs associated with re-acquiring all those personal favorites). The easy, popular stuff makes the transition first, so if something is hard to find in a current, common format, it typically gets really hard to find in the earlier days of the next generation’s music-reproduction models.

At this stage in my life (i.e. old, cranky, set-in-ways), I like it when it’s relatively easy to find stuff, although I do occasionally rue having long lost the thrill of the hunt associated with trawling record bins way back when. I can think of several specific cases over the years when particular items of interest seemed impossible to procure. (Note that I do still and always have purchased my music, and do not steal it via any of the quasi-legal or illicit sharing services). Human Sexual Response’s masterpiece In A Roman Mood (1981) only became available in legal digital formats a few years ago, to cite one example I’d previously written about, many years ago. The Tubes’ Love Bomb (1985) is another one that was conspicuously absent from their digital catalog until recent years. Granted, most Tubes fans consider it to be their worst record, by far, but for reasons (probably) inexplicable, I have been very fond of it since acquiring it on cassette while at the Naval Academy, and spinning it regularly during summer training cruise season. I can also remember a long search to acquire Wire’s 154 (1979) after the group broke up for the first time, finally nabbing a copy in London, Ontario, years after its initial release. Most of the Tragic Mulatto catalog has never been formally released in digital format, as best I can ascertain, though I continue to poke around for it.

These and most other related examples of musical product scarcity in my listening world are generally understandable due to the small audiences for the records in question, or the demise of record labels which originally released their work, or band dissolution or other such market-relevant forces. But not everything I listen to is weird (or worse), and I can truly appreciate and enjoy spinning tunes from any number of genres across the musical spectrum, including its most popular ends, as long as it is music is well crafted and performed with conviction. So sometimes I get in the mood for something on the platinum-level pop front that seems like it should be easily, obviously available in current listening formats, and am deeply surprised to discover that’s not the case.

A couple of months ago, I was listening to the Bee Gees outstanding Main Course (1975) album, which features the song “Come On Over.” Hearing it reminded me of Olivia Newton-John’s better-known cover version, which was a moderate radio hit in 1976, just a couple of years before the film version of Grease catapulted Newton-John into the highest levels of the pop culture stratosphere. Before she charted with “Come On Over,” Newton-John had already achieved a high level of commercial success with her more country-tinged early works, scoring such U.S. chart hits as “If Not For You,” “Let Me Be There,” “If You Love Me (Let Me Know),” “I Honestly Love You,” “Have You Never Been Mellow” and “Please Mister Please,” among others.

Two of the albums most spun around the Smith Family Household circa 1975 were Olivia’s If You Love Me, Let Me Know (a U.S.-only disc that combined various album tracks and singles from her international catalog, including several of the hit songs cited above) and Linda Ronstadt’s Heart Like A Wheel. If I recall correctly, we got the Olivia one from my grandmother, and the Linda Ronstadt one my parents won at some Officers Club social event, which likely involved heavy drinking. Those two records had a lot of stylistic similarities, with sweet-voiced female singers reinventing a collection of other songwriters’ songs, atop well-arranged countrified musical beds. We lived in Kansas at the time, and those two hit albums (along with my Dad’s then recent-ish faves: Neil Diamond’s His Twelve Greatest Hits and John Denver’s Back Home Again) sort of frame my mental soundtrack to remembered family time and meals from that particular place and period in my life, when I wasn’t otherwise busy obsessing about Wings.

Ronstadt’s 1974 hit record has maintained a high level of critical credibility and commercial resonance since its release, standing as a peak example of the now-legendary smooth country-rock Laurel Canyon scene. I doubt that it has ever gone out of print, and I’m sure that it still generates good money for everyone centrally involved in its production. Olivia Newton-John’s contemporaneous American release, on the other hand, seems to have mostly disappeared from the narrative of her career, eclipsed by the commercial cheese of her Grease, Xanadu and Physical-era mega-media hits from the late ’70s and early ’80s. But under the rubric of comfort music that I laid out a few months back, here, that If You Love Me, Let Me Know album is certainly one that has satisfying family connotations and emotional vibrations for me, so I decided to score a copy of it and dig into the nostalgia jukebox for awhile.

First stop was iTunes. Hmmm. Not there. Then a couple of other digital outlets. Huh. Not there either. So I trundled over to Amazon to get a CD copy that I could upload into my computer for easy electronic spins on the many music-making machines that soundtrack all of the spaces I occupy. Imagine my surprise when my search request returned this: 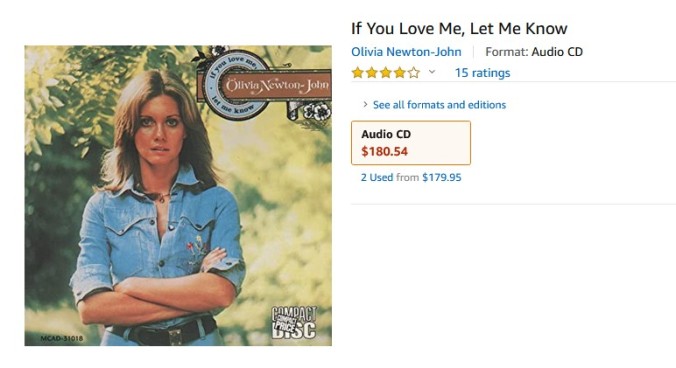 $180 for a ten-song CD version of an album that nabbed the Number 1 spots on both the Billboard Top 200 Pop and Top Country Albums charts in 1974?!?! Holy Moly, there’s a supply-demand curve case study for someone to parse and deconstruct, where something once so popular is now rare enough to warrant such pricing. (Yes, I know, there are beat-up old post-garage sale vinyl copies available for sale at reasonable prices, but I’m too old to play hipster kid and nonsensically insist that I really dig all of those pops and scratches and fuzzy wobbles for the analog warmth they provide). I explored around online a bit more to see if some of Olivia’s other earlier albums experienced the same digital scarcity conditions, and it does indeed seem to be the case that most of her career successes pre-Grease have been wiped from the commercial record and market, even though I would strongly argue the case that those early records include much of her finest work.

Once upon a time, lots of people around the world apparently would have agreed with me on that topic, if we presume that people voted with their record-purchasing dollars. This one has bemused and befuddled me a bit over the past couple of months, and I’ve not found any clearly-elucidated explanations of the situation online. I guess it just seems that one older man’s comfort music is the rest of the world’s forgotten dreck. Pity. I was most especially looking forward to having Olivia’s version of “Mary Skeffington,” a brilliant take on an equally-brilliant song by the great Gerry Rafferty. Yeah, I can find it on Youtube, and that’s okay, I guess, but I’d prefer to have it in my catalog for portable spins and mixes and such-like, along with the other nine fondly-remembered, but now inexplicably inaccessible songs on this lovely album.

Do you have similar “can’t get it from here” stories about the music in your life? Share them in the comments below if you do. We can have a pity party, with an inadequate soundtrack.