Note: All six of these little poems were written in 2004, and are copyright JES. I leave it as an exercise for the reader as to what themes they have in common and why I share them today.

Despite the spite, I suggest paying attention
to the next set of ravings that fall out of his head.
He’s a mean one, he is, on that there’s no argument,
but he telegraphs his moves through the things that he’s said.
He’s quite predictable in the targets of his new obsessions
and in his pettiness and willingness to carry a grudge
long after a normal person would have just let it wither:
once set on a bad path, he’s a hard one to budge.
But he’s ponderous, not nimble, and easy to outwit
if you do all your homework real well up front.
If you learn what he’s aiming for, by paying attention,
you can easily stay clear when he’s out on the hunt.
He’s a monster, though frankly he lacks the key skill
that he needs to be effective at the point of the kill.

There’s foreign observers
down at the polling station,
as the hacks and the flacks
champ for confrontation.
I wonder, as I’m voting,
with some consternation:
When did we become
such a mess of a nation?

no data, doesn’t matter
get some facts and force them into
tangled webs of gossamer
and lies
the scientists are vying
with the publicists and naturalists
romanticists and classicists
and spies
the talking heads are talking
as the chopping blocks are chopping
and the commentators comment on it all
home looking, works cooking
we crash the couch and force the spike
into our flaccid arteries
and let the world
fall upon us with a sigh
on flat screen tablets
and in digital surround
on a rising stream of noise we swim
it engulfs us and we drown again
anesthetized
’til tomorrow when
we rise
like Lazarus
to die again

There you go, let loose the flow
of tainted waters, rising from below,
bitter bile, salty tears, unspoken fears,
all the yes dears, for years and years
rupture the structures, the rocking towers,
like cattle in Babel lowing the hours,
some past, some present, some yet to be,
let loose the torrent, set the flow free,
ride, Sally, ride, on your column of flame
bottled and brokered by merchants of pain,
and the rain, oh the rain, the heavens part,
the waters are rising, drowning your heart
in the cascades and rapids, the swirling pools
of singular servants, wisely suffered fools,
for a moment, a minute, a point in space,
caught in curved surfaces, lost in a place
of floods and mud plains, waves of grain,
Amber alerted by Sally’s complaint
of pressured flow building from below,
so let loose the flow, let it flow, let it flow.

They cut the timber, we make it into pulp
They bring us pine trees, we grind ’em into pulp
Our machines eat up their logs in one big scary gulp

They work the west seam, we burn their coal for heat
They bring us black coke, we burn it up for heat
Watch ’em coughing up their lungs while drinking in the street

he’s spun up like a top wound by an old crack-addled dervish
and he’s twitching like a fish, he’s flopping on the deck, he’s nervous
and he’s agitated, too, he’s got an edge just like a cleaver,
something somewhere is broadcasting, and he knows he’s the receiver
of its tension and its anger, though he couldn’t quite explain it,
he’s the bearer of a lit fuel tank with no good way to drain it,
just a spark or just a cinder, and the whole town would be flattened,
leaving nothing in its wake, not even hatches that he’d battened,
though he knew that it was coming, he just couldn’t seem to date it,
and it caught him by surprise the day the deal was consummated 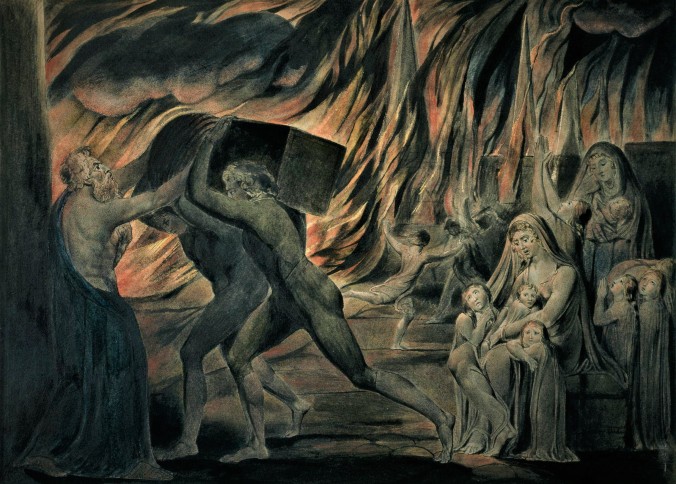 William Blake could see the future. It looked much like the past.

One thought on “Six Little Poems”