I didn’t mention it here at the time, since I was deeply annoyed and didn’t want to talk about it any more, but when we returned from our January trip to New Mexico, I discovered that my Felt road bike was missing from where it had been hung and locked inside our apartment building’s communal garage. I filed a police report and notified the property manager, and after reviewing security footage, they confirmed that on Christmas morning, a group of well-equipped thieves cut cables, broke locks, and made away with numerous bikes from our building and from the building next door, where our daughter and her boyfriend live.

Grrr!!! There’s a special place in hell for bike thieves, and ones who violate people’s residential spaces on a special holiday should get some extra terrible punishments inflicted upon them when they get there. Bikes, especially road bikes that get a lot of mileage put on them, are really very personal items on some plane, specially selected and configured to the rider’s body and riding style and skill. When I find one I really like, I stick with it: counting the Felt, I’ve only had five Trusty Steeds since college, with my 1984 Bianchi Reparto Corse Piaggio being the longest lived of the bunch.

I have had USAA insurance since 1982, and they did their usual fine job of quickly assessing and covering the cost of the bike and the numerous custom items that were on it when it was pilfered. There are no authorized distributors of the Felt brand around Des Moines, (I bought mine when I lived in Chicago), and I like to have bikes from lines supported by local shops, so I elected not to get another one of those. I did some online and in-store shopping and comparing, and elected to buy a Masi bike this time around from Ichi Bike in Des Moines’ East Village, which has become my go-to service shop since we moved back here. I especially wanted to support them now given the pandemic-driven business slump. I also popped for a pair of these. Grumble.

I took my new Trusty Steed out for its first spin today, a 50.1 mile loop out to Dallas Center and back. I made a couple of stops for tweaky adjustments along the way, and have a couple of others that I will do before I ride again, but overall, it felt good, and rode well. Great success! There are some differences from the Felt that I need to get used to and/or change, most notably a lack of in-line brake levers and different crank and cassette gear configurations, but that’s easy enough to do, so long as the bike itself is solid and sound, which it is.

I hope to put at least 2,000 miles on Trusty Steed this cycling season, subject to move and travel constraints, so I’ll let you know when we get to the latter part of 2020 if it feels as good at the end of the season as it does at the beginning. Fingers crossed! 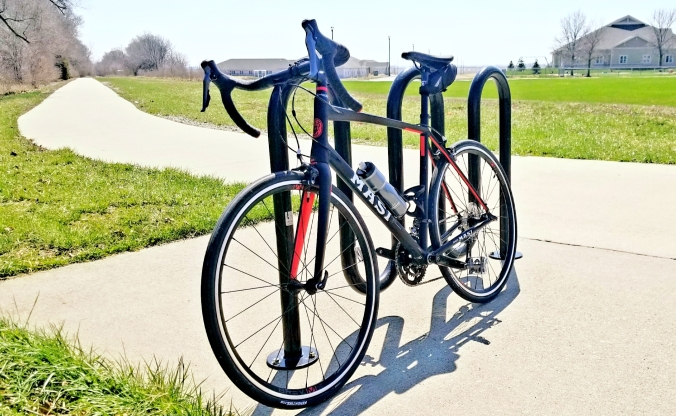 Trusty Steed at his first pit stop, about 27 miles out from home in Dallas Center.