There’s an old joke about a Southern man’s personal prospects that posits the greatest uncertainty about his health outcomes thusly: Will he have his first heart attack before he loses all of his teeth or not? I come from a long line of big Southern Men, and it was a valid question for a lot them, as dentures and cardiac arrests were certainly real life concerns for most of the old gents in my life, many of whom were indeed done in by clogged arteries and diabetes, before the cigarettes could get them.

I did learn from that, and I watch what I eat and I exercise regularly. I’ve also been blessed with tough teeth that I care for properly, even though (true confession time) I have probably only been to the dentist two or three times since college. On those rare occasions when I do go, the dentist invariably praises my oral hygiene and says everything’s fine. I’m told that different people have different bacterial cultures in their mouths, some that foment the growth of plaque, and some that foster decay and cavities. Neither one of them seems to care for my pie hole. I’ll take that as a blessing.

I had some blood sugar and cholesterol readings some years back that were marginally problematic. I adjusted the necessary lifestyle choices accordingly, and neither one’s much of a concern for me now. I know I don’t eat as much fruit as I should (it’s a grease group thing), but otherwise I’m pretty good about maintaining a high fiber, low fat, low carb diet, without much red meat in it. I don’t obsessively mind my calories, but I’m mindful of portion control, and I rarely indulge in any belt-busting all-you-can-eat buffet style behaviors either.

But, boy oh boy, is that all learned behavior of my adulthood, because I was brought up eating the polar opposite of that, in almost every way. Today’s archival article is a remembrance of those glorious, innocent days when buffets, fried foods, sweet tea, processed meats, and just about every other unhealthy thing imaginable featured heavily in my diet, and the diets of pretty much everybody around me, friends and family alike. It was all bad for us, sure, but it certainly tasted good, and I sure do remember those days fondly and wistfully — most especially my dad’s quixotic quest for the perfect chili dog, which found us buying unhealthy bags-worth of them in most every town we lived in or visited over the years. (Note well that what Southerners call “chili” on a hot dog has no resemblance to the Southwestern food of the same name; it was more of a greasy, chopped meat paste that it was bean-rich bowl food).

This article focuses a lot on diner-style restaurants, and I wrote it while still living in New York’s Capital Region, where those are a big part of the regional culture and cuisine. I tried to find an analogue of that experience when we moved to Des Moines, but never quite succeeded. Drake Diner on the campus of the same name has the chrome exterior and big menus, but it always felt more like a diner-themed college cafeteria than it did a real diner to me. In our current East Village neighborhood, there’s a new place called Clyde’s Fine Diner that advertises a gourmet-caliber diner experience, but that’s just an oxymoron, really. The food at Clyde’s is quite good, mind, and they even have Shrimp and Grits on the menu, but it’s foo-foo, and bears no resemblance to what real Carolina Shrimp and Grits looks and tastes like, while the restaurant interior is in the standard noisy Iowa box-style that I’ve written about, unhappily, here. Diner and hipster dining cultures just don’t align, no matter how hard folks might want them to. Bubba’s in Des Moines has also legitimately good and authentic Carolina-style food, but it’s more of a white linen restaurant than a diner, so that doesn’t count for me either.

While they don’t usually call them diners, once you get out into rural and small town Iowa, you can find a lot of family-owned, non-chain restaurants that are legitimately analogous to the feeding holes of my Southern childhood. While the menu highlights can be dramatically different, there’s fried foods aplenty, and you can easily create a true carbohydrate nightmare meal if you want to. If I had to pick the best of the bunch that I’ve experienced to date in Iowa, it would be Cronk’s Restaurant and Lounge in Denison, which has been around for over eight decades. It’s located on US-30, which is the modern-day remnant of the Lincoln Highway, America’s first transcontinental automobile roadway. Its hearty food, great prices, convenient location, quick and friendly service, and unassuming interior have likely made it the perfect pause point for millions and millions of travelers over the years, while the locals seemed to love it just as much when I was there.

It’s good to know that places like that still exist. I don’t want to eat like that everyday, but I’m glad I can when the spirit moves me to do so. 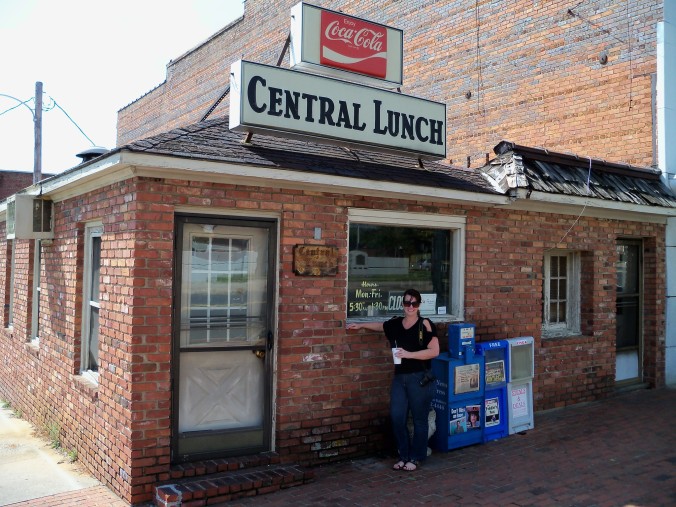 Central Lunch was still hanging in there when my sister and I visited Albemarle in 2011 — but the last time I was there a couple of years back, it seemed to have been finally shuttered, alas.