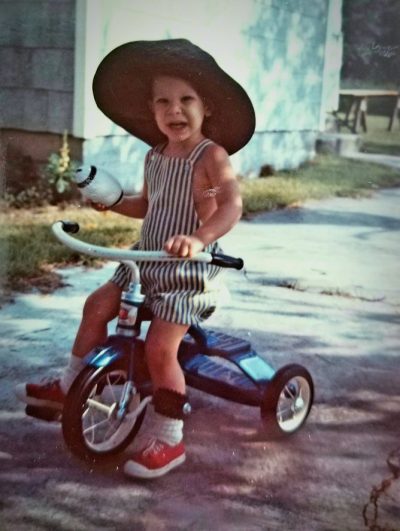 The photo at right is among the oldest ones I have of myself. It was taken in the mid-’60s in Ridgeland, South Carolina, at the little bungalow we called “The Green House,” where my Mom and I lived while my Dad was off on various and sundry Marine Corps duties. I am wearing my “Deputy Dawg Hat,” one of my grandfather’s cast off chapeaus, named after my favorite cartoon, which was the only place on television where people spoke the way they did in the real world around me. I’m clutching a football (probably via my Dad, a former offensive linesman who likely expected I’d follow in his footsteps), and whenever I look at this photo, I always smile at the classic piece of redneckery visible in our back yard: a picnic table made out of a door laid over a couple of sawhorses.

I also see, of course, that I am sitting on a tricycle, which I know that I love love loved! This old photo and others from that same general period featuring that same trike remind me that I’ve been rolling around on self-propelled wheels for as long as I can remember (maybe longer), and that bikes have been a key part of my life’s narrative for over half a century. I do not call myself a “cyclist” (not fast enough for that) nor am I a gear nerd nor do I collect bikes nor do I feel like I need the latest and greatest equipment at all times. I just like using my own wheels to get where I need to go or (even better) to just roll around checking out the world around me, with no particular destination in mind. I like bikes and biking. I always have. That’s it.

I should note at this point that I’m not just talking about “bikes” generically here in this article, but rather the long line of very specific bikes that I have owned and ridden, oftentimes well beyond their normal life expectancies. I can clearly remember them all, every one: what each one felt like, where I went with it, what I did to it, what I liked about it, what I didn’t, and where each of them went when our times together were done.

My family moved to Naval Ammunition Depot (NAD) Earle near Colts Neck, New Jersey a couple of years after that trike photo was snapped, and I got real two-wheel bike once we got settled in there. We lived at the top of a long hill on Green Drive (an extended cul-de-sac), and I learned to work my two-wheeler by essentially being set atop it and pushed down the hill, with wobbly training wheels at first, each of which fell off (at different times) over the course of a few weeks or so, eventually leaving me rolling like a big boy. My Dad was the Commander of the Marine Corps barracks at NAD Earle, and the base was secured at its perimeters, which meant that me and other little kids in the neighborhood could essentially just ride and ride and ride to our hearts’ content without any adult supervision, as far as we wanted to go, until the sun went down, or one of our parents sent the base security folks to round us up and send us home.

As I grew, I went through a series of larger and larger bikes (usually birthday or Christmas gifts, as I needed them) through various family moves to Virginia, Kansas, Long Island, Rhode Island and North Carolina. I rode them on the roads, and I rode them in woods (the distinctions between street bikes and trail bikes are generally lost on kids), and I destroyed a few of them by jumping them over ridiculously unsafe ramps, or field stripping them for parts to add to other, newer bikes, or doing the various other stupid things that stupid teenage boys do to their belongings.

I didn’t take a bike with me when I went off to the Naval Academy in 1982, but I bought one in Annapolis soon afterwards: a great Bianchi Celeste road bike. I kept and rode that one until 2011, when we moved from New York to Iowa, making it my longest-lasting bike buddy, by far. That’s me and Green Machine at right, probably in spring 1988, in the driveway of the first house that Marcia and I shared together. I think she probably took this photo, though I can’t say that for certain. (Another redneck classic moment here: I couldn’t afford real cycling gloves, so these are just thick wool winter gloves with the fingers cut off. You can take the boy out of South Cackalacky, but you can’t take the South Cackalacky out of the boy).

By the early 2000s, we were living in Upstate New York, and various family and work obligations made it harder to use my limited free time by taking the sorts of long road rides that Green Machine was designed to accommodate. So I decided to get an off-road bike instead, and do shorter, more intense, rides closer to our home, mostly in the woods. That bike was named Trusty Steed, and man oh man, did I ride that thing hard, using it as a companion on the various Hidden in Suburbia photo-essays that I wrote and published on and off until 2011. Trusty Steed wins the “takes a licking and keeps on ticking” prize among all of my bikes for accommodating whatever I threw at him in stride, and still getting me where I wanted to go, even if it was via routes that weren’t really made for bikes. At all. 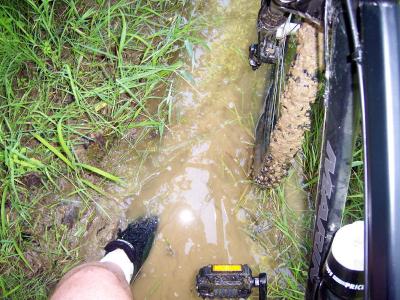 Trusty Steed and I going where we shouldn’t . . .

I took Trusty Steed with me to Iowa in 2011; Green Machine stayed in New York, given to a charity that refurbished bikes for immigrant families. Unfortunately, most of my riding in Iowa was done on roads or paved trails, not in the woods, and years of abuse meant that Trusty Steed had a variety of clanks and creaks and bonks and rattles that were okay when crunching through rocks and sticks, but became distractions in the relative quiet of blacktop pavement riding. He was put out to pasture (in our garage), and then I went through a couple of replacement bikes in short order after that, before settling on a hybrid bike named City Liner (named after a Good Rats song) that wasn’t exactly a superstar in either off-road or on-road situations, but got the job done.

When we moved to Chicago, we went from having a three-car garage (with plenty of bike space) to having a single rack spot in a communal condo bike room, so I donated all of my bikes except City Liner to the Des Moines Bicycle Collective. He seemed to be the best choice among my bikes, since city riding tends to require a combination of skills, including pot-hole dodging, curb-jumping, and pedestrian slalom on the various lake-front trails. But then a few weeks later, with virtually no training time logged, I was off to Florida to ride my first Tour des Trees, and it quickly became apparent that I’d made the wrong choice of keeper bike if I was going to ride a 500+ mile, seven day adventure cycling tour every year.

So I went back full circle to a good road bike again, selling City Liner to a neighbor in our condo building who needed a city bike for his son, when he was home from college. My newest (and current) bike is Black Felt. I rode him in the 2016 Tour and have done all of my Chicago and training riding on him since then. (Though I do feel mildly guilty to note that I rented a sexy Aluboo roadster from our Tour Director for the 2017 Tour, so I didn’t have to ship Black Felt to and from Washington, DC, in the midst of a bunch of other work-driven chaos).

After an atrocious winter and hideously rank and dank spring that ran through the end of April, I’m pleased to finally be back out on the road again with Black Felt. We did a 52-miler this past Saturday, and it felt good. This ride was notable for me in a somewhat subtle way: after 50+ years of being a no-tech or low-tech rider, I took to the road for the first time with a cycling computer onboard, which was an early birthday gift from Marcia. I was somewhat awed and overwhelmed by what it captured when I got home and plugged it into my PC, so I look forward to figuring out how to add these bits and bobs of information into the way I ride going forward. (I know it will be helpful on the Tour des Trees: after three years of being the guy with a bunch of folded up paper cue sheets in my jersey pockets, I will at least look like the cool kids now).

Sorry about that elevation number. There ain’t no hills in the Second City!!

One thing that was particularly interesting to me among all the data was the impact on average speed that Chicago-style riding produces: when I was on the bike and moving, I generally kept to a 16 to 18 mile per hour pace, but since inner city riding means I can rarely go more than five or ten minutes without having to slow dramatically and/or unclip and stop for a light, car, pedestrian, crossing, whatever, it made my effective speed only 12.5 miles per hour. I guess if I could get to where my Chicago average speed was 15 miles per hour or so, then I’ll really be able to move up in the pack when we get out on the open road in Ohio for this year’s Tour des Trees.

So that’s a lifetime in bikes there, for what it’s worth, and for better or worse. It’s hard for me to imagine a time that I won’t be rolling around on self-propelled wheels as I’ve done for over 50 years already. Hopefully they continue to be of the two-wheeled upright version, like Black Felt, for many more years, but if a time comes when I need to go recumbent, or back to a trike, or even a wheel chair, well, hey, no worries, no shame, so long as I’m still rolling down the road under my own power, since that’s what counts to me.