We’re two days shy of the year’s shortest day, and deep in the heart of the coldest snap of the current winter, so it seems a good time to look back over the past twelve months here at the blog and in the greater personal, professional and cultural world around me.

Counting this one, I published 27 blog posts here in 2016. That’s a big drop off from the 77 posts I published in 2015, but that was a somewhat conscious decision as I decided to focus on my Short Story of the Month project, which I completed successfully earlier this month. The 12 new stories I wrote over the past year were knit together with half a dozen older ones into a single manuscript, and it’s off for copy editing as I type. You writing types: if you’ve got any good leads you’d suggest for placing the manuscript commercially in 2017, I would appreciate an introduction!

Marcia and I opened 2016 in our still new home town of Chicago, watching the inaugural edition of the city’s “Chi-Town Rising” star drop on the river, which was frankly underwhelming. You’ve got too much going for you, Chicago, to try to ape New York City! Let them have their thing, because you’ve got plenty of your own! Seriously! They’re apparently doing it again this year, but we will welcome 2017 in a more exotic locale instead: Reykjavik, Iceland. We loved our summer trip there some years ago, and are excited to see it under the polar twilight with (hopefully) some Northern Lights in play to guide us into a new year together.

Between those two points, we had a crazy travel year. Marcia goes back and forth between Chicago and Des Moines ever other week for work, and I traveled to 26 states this year for my own work. Since a picture is worth 1,000 words, here’s the visual representation of my travels in 2016: 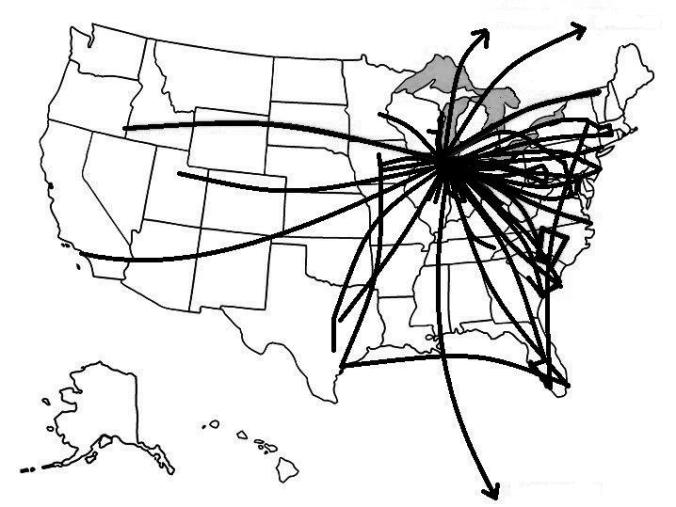 The arrow pointing southward was to Grand Cayman, which Marcia and I visited together as part of a work trip for me. One of the northerly arrows points to Iceland, as mentioned above, and the other one points to Tuscany, where Marcia and I had a wonderful vacation with many new friends from Australia and New Zealand. I also did about 600 of those miles  on a bicycle through my native Carolinas.

See? While it was my intention to try to do a little bit less traveling this year for work, I just laid out my 2017 schedule with my staff, and at this point it looks like I will be going to Mississippi, Arizona, Puerto Rico, Michigan, Wisconsin, Ontario, Maryland (twice), Virginia, Pennsylvania, Minnesota, Florida, Colorado, Washington (state), Oregon, Missouri, Texas, Iowa, Connecticut, California, Ohio and Oklahoma during the next twelve months. Plus wherever Marcia and I decide to go for our international summer trip. Personally, I’m lobbying for Malta. So, uh, my 2017 map will probably look like a spaghetti chart too. Hmmm.

Even with all of that travel, I suspect that 2017 will look like more of a typical blogging year for me, so if you have been and intend to remain a faithful follower this site, then (1st) thank you, and (2nd) there might be more things for you to read beyond short stories next year. I’m considering a couple of web-based writing projects that are a little bit more interactive, so will update on that when I decide which one (if any) I want to pursue.

Some other bits and bobs to wrap things up . . .

Music, Theater and Dance: I’ve already done my 25th Annual Best Albums Report, here, and my Annual List Of Most Played Songs, here. On the live front, we saw many plays, concerts and dance performances, and honestly, I’m just really happy to have spent the year experiencing them in the moment and not documenting and making lists of them, and I’m disinclined to go back and do so now to try to recreate them after the fact. Maybe next year, I’ll start keeping a list. Or maybe not. We’ll see. I kinda think my live performance criticizing years may be behind me, y’know?

Books: As posted here multiple times before, my book reading tends to cluster predictably into four primary areas: 10% Fiction, 40% Natural Science and History, 40% Music Biography, and 10% Tales of Human Suffering. Over the past year, my fave reads didn’t stray too far from the norm, although I read more older books than newer books in 2016, so my list of favorite new releases is a bit brief:

Movies: We have a theater within walking distance of our apartment, so we saw more flicks in first release than we typically have in the past. The best films I saw in 2016 (thus far, recognizing that much of the Oscar Bait is just coming out now) would include:

Politics: Ennnnnhhhhh . . . . the less said here the better, I think. I’ll leave it to others to write about those matters more regularly and effectively than I do. That said, I did write and publish a poem here in the days after the election called “Tiny Blue Isle,” which explains what it feels like to me to live in Chicago right now. A local colleague liked the concept and approached me about using it for a progressive politics feed on Twitter and (maybe later) as a website, and I agreed to let my friend do so.

Art: We are blessed with ready and easy proximity to some exceptionally fine museums hereabouts, and three solo exhibitions stand out for me among the dozens we saw in 2016:

Websites: Two websites dominated my daily reading in 2016, and I have written about both of them here before: