I spent a good chunk of my very early childhood at my grandparents’ homes in Ridgeland, South Carolina and Albemarle, North Carolina. While the towns’ characters and looks were quite different in many ways, both of their urban centers had similarities, shaped as they were by the railroad networks within them.

Albemarle was a cotton processing town, so there was a spiderweb of small spurs and crossings hanging off of the Winston Salem Southbound main line, all designed to get slow-moving freight cars close to the loading docks of the Wiscassett and Cannon Mill plants in town. Ridgeland, on the other hand, was always a railroad waypoint: the town was founded at the middle of the old Charleston to Savannah Railroad, and long, loud trains have always barrelled down its civic spine on their way from somewhere to somewhere else.

I was frequently taken down to the railroad centers of these small Southern towns by my grandfathers and my dad, though my interests were different from most little boys my age: I cared less about trains than I cared about tracks. The nascent map and system nerd in me was fascinated by the way that fixed rails could be managed to control huge moving objects, shifting and shuttling cars, making way for engines going opposite ways, building long lines of boxes and tanks, and storing fallow carstock on sidings.

I liked watching trains as they passed by, of course, but I wasn’t looking at their engines or their brightly painted boxcars, I was watching their wheels to see how the tracks got them where they needed to go. And when I wasn’t down by the mills or the crossings, I could often be found poring over maps, tracing with my finger the evocative little cross-hatch railroad symbols as they cut across pastures, wound their way through towns, divided, diverted, spread their fingers into rail yards, then knotted themselves together again like cables connecting mainlines. It was like being lost in the sclerotic circulatory system of a nation already transitioning to its own futuristic autobahn era.

That love of tracks and the trains they carry has stuck with me into adulthood, and I’ve always appreciated train travel, even when it’s not a terribly efficient or effective method of getting places. While the Albany to Penn Station AMTRAK run was a great, quick, affordable way to get to New York City for the many years we lived Upstate, the over-night route from Penn Station to the Low Country of South Carolina wasn’t quite so effective. Marcia and Katelin did that trip with me once, and they still tease me about it, since I gave them our sleeper car, and I sat upright all night long in coach, next to a nice old lady who shared her bucket of cold fried chicken with me.

While railroads don’t color my creative subconscious quite as much as the woods do, they do creep into my writing, especially my poetry — and, as I think about my some of my railroad poems today, I realize that their focus has indeed been as much on tracks as on the trains they carry. The tag line of this current blog (“slow molasses drip under a tipped up crescent moon”), for example, is from a poem called “Jefferson Water,” which describes a midnight trip:

. . . rollin’ down carriage lanes through Porterstown
and Bisco City, Eastern Hellebore, Locust, Clyde,
rollin’ on down that dead rail line, bringin’ me mine . . .

The engineer stands way back in the dusty cab
of the 2-6-2 engine rolling southwest from Canadys,
bound first for Hampton and then for Savannah,
heavy with a load of southern yellow pine trees.

And then there’s “Annexation,” which evokes a certain part of town where:

A railroad spur splits the annexed land in half.
Rusting grain silos and coal bins
nestled against the tracks.

Or “The Light,” about a trio of disbelieving ghost hunters who have a surprising experience one night:

We looked due west, down the tracks.
There was an overhead trestle about fifty yards out.
We couldn’t see it clearly late at night,
except as a starless black bar above the rail bed.
A little bit further out, the trees closed in around the tracks.
The line had been abandoned for twenty years, at least.
If you hunkered down, it looked like a darkened stage:
trees as curtains, dark trestle making the arch.

Then, later, the railroad closed.
The boxcars no longer rumbled through with freight,
stranding all of the local hoboes,
who were rounded up and bussed out of state,
without public debate.

I’ve been thinking a lot about trains and tracks over the past couple of months since we’ve moved to Chicago, since they’re pretty much a daily part of my existence now. Marcia and I ride the Blue and Red Line subways regularly, the rumble of the elevated trains around the Loop is a part of the sonic experience of being downtown, and the Burlington-Santa Fe North line carries the Metra trains I take out to work in Naperville every day.

I love the hustle and bustle of passing through Union Station, beneath which vast, knotted networks of tracks carry tens of thousands of people in and out the city every day. Coming back from work each day, I can sense that I’m close to my destination when the train makes a sharp left turn northward in the midst of a huge field of rolling stock, an industrial staging ground for a continent’s worth of commerce.

Carl Sandburg’s “Chicago” is rightfully one of the most famous creative pieces ever written about the city where Marcia and I now make our home. I have always loved the language of the poem, and living here, I have come to appreciate its meaning all the more, especially its third line:

Player with Railroads and the Nation’s Freight Handler . . .

I’ve followed and dreamed of tracks for as long as I can remember, a “player with railroads” in my own small, odd way. My life’s mainline has now carried me and Marcia to Sandburg’s City of the Big Shoulders, which is proving a wonderful way station, its sidings filled with history, its freight yards rich with bounty, its crossings loud and electric, and its roundhouses pointing us toward marvels every way they turn.

It will take a long time to explore and internalize these tracks and trains of Chicago, and to make them our own, each in our own way, sometimes in the sleeper car, sometimes in coach. I look forward to that experience very much — but I also know that there will always be at least one mysterious track for us both, heading into the unseen distance, off the edge of the map, its station stops and final destination unmarked and unknowable to us, until the time when the conductor shouts “All aboard, and don’t forget your bucket of chicken” and we hop that train, hand in hand, to our next great adventure together. 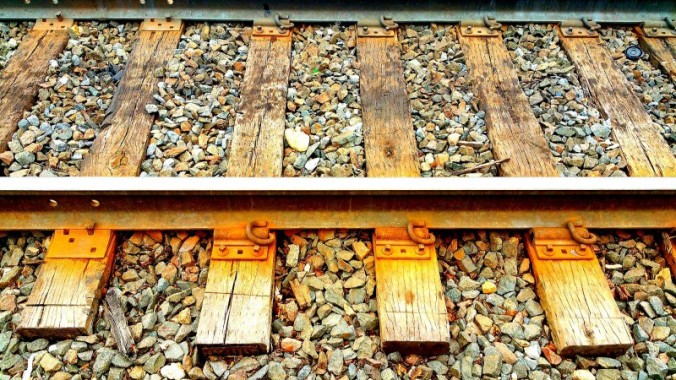 3 thoughts on “Player With Railroads”