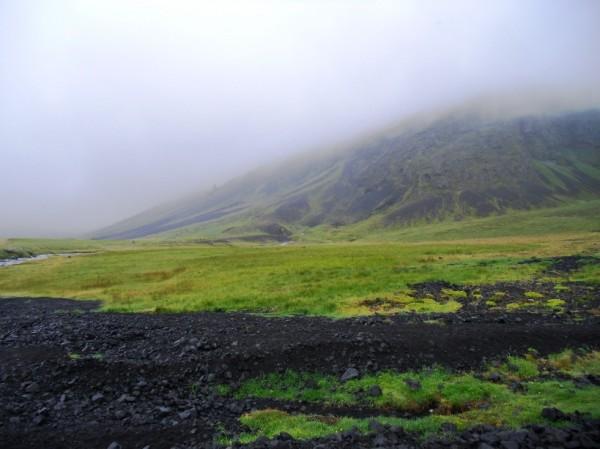 The mist rolls down the mountain, o’er the green and pleasant plain / we stand and watch it coming: it arrives as driving rain.

Getting There: It’s an incredibly easy drive and flight combo from the New York Capital Region to Boston’s Logan Airport (a little bit less than three hours), then a nonstop flight on Icelandair to Keflavik that takes about four and a half hours. I can think of few places so exotic that you can get to so readily and (in relative terms, of course) inexpensively. I thought Icelandair was aces as an airline, with great service, and a great flight experience. I loved that every passenger had his or her own interactive, back-of-seat entertainment system, so passengers could watch what they wanted, when they wanted, rather than being force fed the latest in Hollywood tripe from centralized television screens. They offered Icelandic movies to accompany the American ones, which was quite nice, and some of the choices displayed an aesthetic sense that I doubt Southwest Airlines will ever be able to emulate. (Darren Aronofsky’s The Fountain as an in-flight flick? Wow! I love that movie!) It also felt great to fly on a national flag carrier like Icelandair, as I think we really lack something in the United States by not having a single flag carrier to serve as a source of national spirit and pride for those who fly on it. Most of the great airlines I’ve flown in the world are flag carriers, and they almost always have a certain zest and zing about them that our lowest-common-denominator private carriers simply can’t begin to match. So Bravo, Icelandair! I want to fly you again, and soon!

Being There: The willingness to let human beings make choices for themselves, good ones or bad ones, really sort of permeates the whole Icelandic culture, in that there aren’t a lot of government regulations or physical barriers to protect people from themselves. You see this on the highways: the speed limits are low, but that makes sense, because the roads outside of the major cities are narrow, and they are often unpaved, and there are virtually no guardrails on any of them (even those at high elevation), so if you want to drive too fast and you fail to make that turn, then there won’t be a rail to keep you on the road, and you’ll have no one else to blame but yourself as you plummet over the edge of the mountain. The same concept applied at the various hot springs and waterfalls we visited: there might be a low (like ankle-high) rope or a painted line telling you to stay back, but there aren’t any guardrails or physical barriers preventing you from doing something stupid, since the government seems to assume that people aren’t, as a general rule, dumb-asses who can’t make sound decisions about their own safety. I found this really striking and surprising, actually, as most U.S. conservative types tend to look at the Scandinavian nations as the great demons of modern progressive socialism (along with Canada), but Iceland sure felt a lot more libertarian and a whole lot less “nanny state” than the United States does today in its willingness to not over-regulate or over-protect most aspects of day-to-day life among its citizens and its visitors.

The Food: We ate incredibly well the whole week we were there, but not in the usual vacation sense of gorging on comforting crap all week. The quality of the food was unassailable, pretty much everywhere we went, from very high cuisine locales like Fiskmarkaðurinn or Einar Ben through “cheap eats” like Krua Thai or Icelandic Fish and Chips. (I put “cheap eats” in quotes, since, again, everything is relative, and restaurant food does tend to be pricey in Reykjavik). We also had the luxury of having a kitchen in our apartment, so we shopped at local grocery stores and did most of our breakfasts and lunches and afternoon snacks on our own. I found Icelandic thin-sliced ham (“skinka”) to be very, very tasty, as were some of the cheeses we found. Iceland also does soup right: every time any of us ordered soup, it was masterful, starting with a seafood bisque at Cafe Paris and ending with a seafood stew at Geysir. I think my favorite meal was at the magical and mysterious Hotel Búðir, where we had lunch one day. I had a sea trout dish that was to die for, truly a fine piece of culinary mastery and skill and style. There are, though, a few things about Icelandic dining that sensitive American souls might want to consider before visiting Iceland, given that the rough climate there has created a dietary tradition where good protein sources need to be consumed, wherever they might be found. So at various restaurants, we found minke whale steaks, tenderloin of foal (yes, as is horse meat), puffin, and all sorts of lamb dishes on the menu (I ate the lamb tongue on the tasting menu at Fiskmarkaðurinn, for instance, so Katelin and Marcia wouldn’t have to) since those are the large, easily cultivated (or captured) animal staples of the Far North Atlantic diet. I pass no judgment. I understand why they eat such things, including the legendary/notorious hákarl, which Katelin and I ate, and which wasn’t nearly as repulsive as I was led to believe it would be. (But, then, I’m from a part of the world where we bread and fry every piece of meat possible, to hide the rancid taste of humid summer flesh rot, so my taste buds may be a bit desensitized to such things). Greenland Sharks and Basking Sharks (from which hákarl is made) are really, really big animals, so if you have to bury them in the sand for weeks and them smoke them to make them edible, so be it. Nice job, Icelanders, for making use of what’s available to you. Well played.

The Climate: High afternoon temperatures for the week we were there were generally in the high 50s or low 60s, though it didn’t drop down much lower than high 40s in the evening. We had glorious, sunny days from Sunday to Wednesday, and generally dry (though cloudy) days on Friday and Saturday, with on Thursday as a pure washout from a weather standpoint. We seemed to hit Reykjavik at the point when the “endless daylight” was rapidly coming to an end; the first couple of nights we were there, the sun dropped below the horizon, but the sky generally remained light blue with pink clouds all night long. By the time we left, it was legitimately dark from about 11:30 PM to maybe 1:30 PM, and our host told us that the darkness increases by about six minutes per night at this point in the year. Our apartment faced almost due west, so we had some incredible sunsets at night . . . around 11:30 PM or so. As a light and short sleeper, I could get used to such a situation.

The People: We found Icelanders to be lovely people for the most part, and it helped us a lot to discover that most of them spoke at least rudimentary English, since Icelandic is a really tough language to pronounce, even on a phonetic basis. (About the only bit of “Ugly Americanism” that we engaged in, privately, was coming up with easily-remembered American words to substitute for hard-to-say Icelandic words. So, for example, while we did eventually learn how to properly say “Snæfellsjökull,” when we spoke aloud about going there, we usually just referred to it as “Snuffleupagus” instead.) We never felt resented or disrespected as tourists, and we felt very comfortable in our interactions with local folks everywhere we went. There’s a quiet pride and dignity evident in the way that most Icelanders carry themselves, especially given the economic struggles that their country has endured over the past few years. I also actually liked the fact that “tipping culture” doesn’t exist in Iceland: they charge you what they need to collect, building in service and handling fees, and you don’t add tips to the bills. This allows customer service folks to function in a way that doesn’t depend on fawning over or touching or getting overly-familiar with customers in the hopes of increasing their tips. I liked the professional distance and dignity of that arrangement a lot, and never felt like we were being rushed out of a restaurant so the server could seat, serve, and get a tip from the party that followed us.

The Country: Unspeakably beautiful. I really can’t do much more than send you to the pictures. We spent about half the week right in Reykjavik, and half the week driving out in various directions into the countryside, and I was absolutely captivated by the views and vistas we encountered. I also came back with a much deeper and greater appreciation for the amazing history of this isolated island nation, which (as best can be ascertained) was settled by European people sometime in the mid-Ninth Century of the Common Era, about six hundred years before Europeans gained a significant toe-hold in what’s now the United States. As a very young child, I was enthralled to discover my name in the history books (Eric The Red, Leif Ericson, etc.), and I think this is what has fueled a lifelong fascination with Iceland, that I’m awed and amazed I was able to satisfy this month. Wonders! Marvels! Joy! How fortunate and grateful and humbled I am for the opportunities presented to me! Life is truly, truly good. Truly!

13 thoughts on “More About Iceland”